Iranian nationals are impersonating Americans online to demonize Indian immigrants as part of a lobbying campaign against proposed legislation in the House of Representatives, a Daily Caller News Foundation investigation has found.

Using Twitter usernames that read like foreign stereotypes of American names, they tweet obsessively at reporters and high-profile political figures about the threats they say Indian immigrants pose to America. 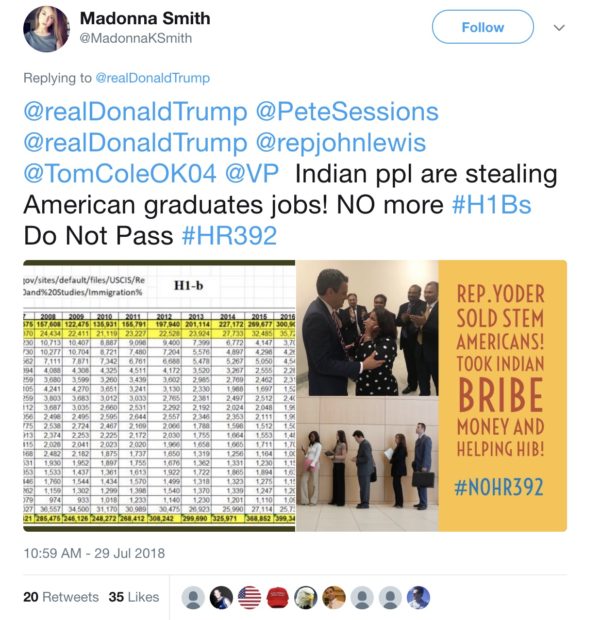 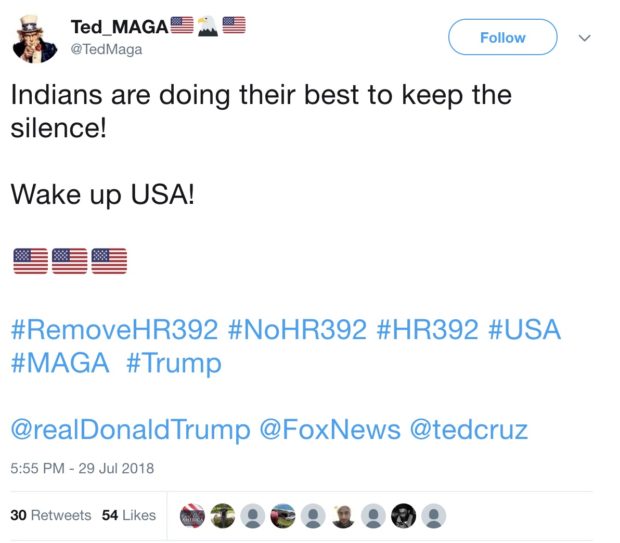 They aim to defeat an amendment to the 2019 Homeland Security Appropriations Bill that would lift the per-country cap on employment-based green cards. The amendment is based on a previously introduced bill, H.R. 392, which had broad bipartisan support.

The per-country cap is currently set at seven percent of the annual limit of the approximately 140,000 green cards the U.S. hands out, creating long lines for certain foreign nationals working on H-1B visas and other non-immigrant visa programs to adjust their immigrant status.

Fearful of waiting additional years in line behind Indian visa-holders who were in the queue first, Iranian visa holders are mobilizing against the bill using chat groups on the messaging app Telegram.

One of the groups has more than 5,000 members and was formed to resist President Donald Trump’s travel ban, which included Iran in its list of targeted countries. Another, with more than 2,000 members, is an offshoot of that group, focusing specifically on lobbying against the bill.

Some group members adopted fake American personas online in an attempt to whip up opposition to the bill by stoking fears of Indian immigrants.

The Daily Caller News Foundation was able to join the online groups through one of the members, at whose recommendation TheDCNF adopted a faux Iranian name to gain access. The vast majority of the group discussions are in Persian, with some mostly broken English scattered throughout the chat.

Group members shared their tweets and Twitter accounts in the group, allowing TheDCNF to match fake accounts with real people. TheDCNF opted not to include members’ last names in this story.

One of the group administrators, Muhammad, wrote out a detailed list of instructions for new members, such as to avoid “racist content” and the “hard right” on Twitter. “Do not give too much emphasis to being Iranian,” he advised. “This issue is not related to this bill.”

Many of the Twitter accounts shared in the group were created in July or August and appear to have been created specifically for the online lobbying campaign.

One group member, Maryam, used a picture of herself, but adopted the name “Amanda Blake” on Twitter. Others used American-themed images like flags for their fake accounts. 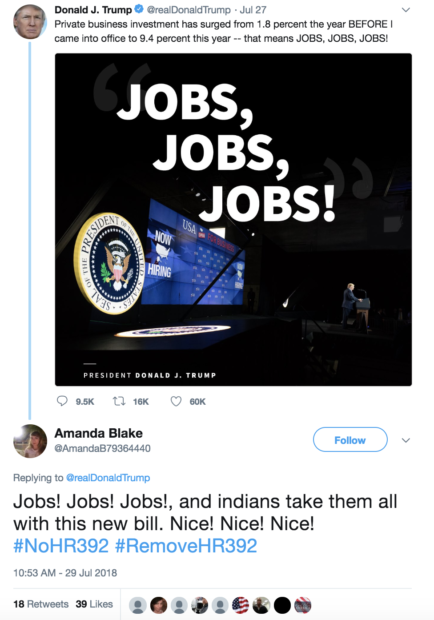 Still others repurposed existing Twitter accounts, changing their names to hide their Iranian identity. One, for example, changed his name on Twitter from “Ali A” to “Allison.” Another, from “Hossein” to “Hudson.” 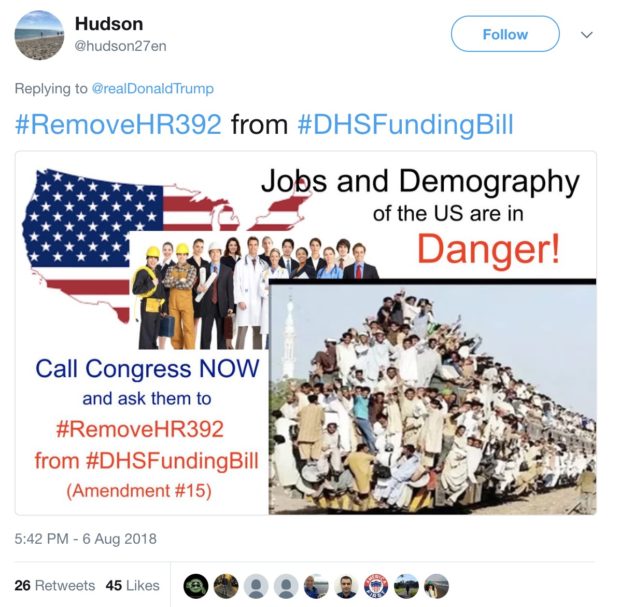 “Fellow #Americans, ask him to #removeHR392 and keep jobs for the US not foreign cheap labors,” wrote “Hudson” in one tweet, portraying himself as an American concerned about immigration.

One of the group administrators, Nazbanoo, confirmed in a Telegram chat with TheDCNF that members adopted faux American identities to aggressively push their anti-Indian rhetoric, which she emphasized wasn’t motivated by bigotry, but by frustration.

“I personally love my Indian friends and I don’t see other Iranians dislike them. Their culture is so close to our culture. We are like each other. There is no reason we dislike them,” Nazbanoo wrote.

“We first were tweeting by our own names but then they started belittling us because of [Trump’s] travel ban so some people started hiding themselves under the name of Americans,” she said. When asked who “they” were, she answered: “well, Indians.”

“Because you know, we just wanted to speak. But suddenly they started saying these things against us and said just Iranians opposed this bill. You know we really didn’t want fight. We just wanted to say our points.”

Not all of the group members are bashing Indian immigrants — some have focused more broadly instead on the legislation’s alleged unfairness — but anti-Indian sentiment is a dominant feature of the online lobbying campaign.

“Do you want Indian guys to give your children an exam?” one group member wrote in the internal chat.

Outside of the groups, members have consistently portrayed the proposed legislation as catastrophic for the U.S. — rather than for their personal ambitions.

“#HR392 is gonna impact your life disastrously!” warned one group member, tweeting as “Sammuel Davis.” He appears to have deleted his account or changed his handle sometime after TheDCNF began tracking him and other group members on Twitter.

“Indians have found a sneaky way to replace US graduates and disrupt our job market with cheap workforce and hide their agenda under a ‘fairness’ propaganda,” Sammuel wrote.

Another group member, Mahdi, took credit for creating an account under the more-Americanized name “Matt.”

The flag-adorned account blasted the legislation as a “TROJAN HORSE” that will devour “all the jobs of the US citizens.” In reality, the bill doesn’t increase the total number of green cards, it only lifts the per-country caps. 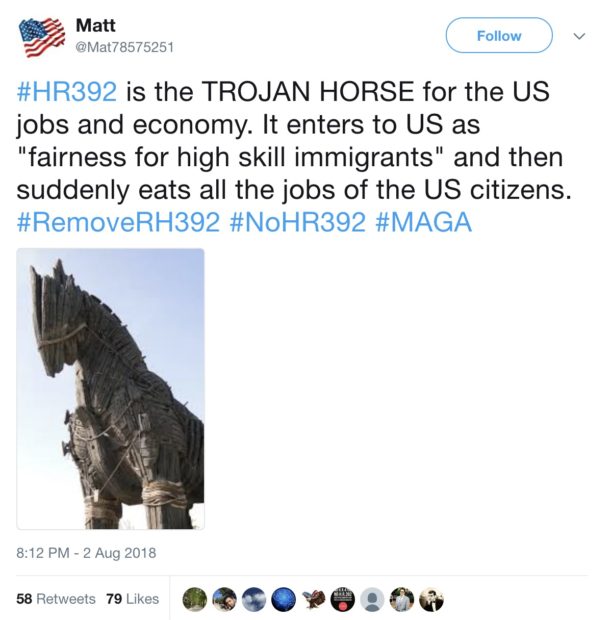 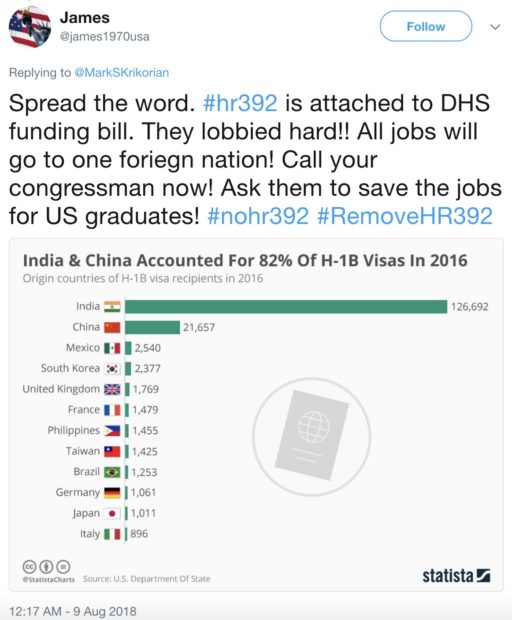 Another group member, tweeting as “Albert Pickens,” pushed the hashtags “#IndiaFirst” and “#MakeAmericaIndia.”

Not all the group members adopted stereotypical American pseudonyms online — some kept their Iranian names while warning about Indian immigrants on Twitter.

“US will grant millions of Green Cards solely to people from INDIA, therefore: USA will become ‘United States of INDIA’!” Shahab, a chemical engineering graduate student, wrote in a tweet he shared with the group.

“What’s the most terrible nightmare for the US? How Americans can get a job when they suppose to compete with 150 Indian people for 1 position?” another engineering student, Mohammad, wrote in a tweet he shared with the group.

“It is the most anti-American bill ever and against the highly-skilled applicants from the US and other nations.”

The tweets are just one part of the Iranian campaign, which has also emphasized calling, writing and emailing American politicians.

Several members shared form letters they received from senators, promising to keep their suggestions “in mind” when considering the bill — a typical response that carries little significance. (RELATED: Foreign Students Overstay Visas At Twice The Rate Of ‘Regular’ Visitors)

Nazbanoo wasn’t sure how effective the online influence campaign has been.

“Well, we spoke to many Americans but media must cover these things. We really do not have voice. We just tweet every day in hope some more people get aware of this bill,” she wrote.

“But after all we are not American and Americans are those who finally decide about future of their country. We hope they know about this bill and then with enough information they decide. Then we obey whatever they want because this is their country.”