Former NFL player D’Qwell Jackson said that President Donald Trump has “a personal agenda against the NFL” when it comes to speaking out about the national anthem protests.

“It’s tough for the current players, even myself a former player because you want to stand up for those guys,” the retired linebacker shared on “Rising with Krystal and Buck” on Hill TV Monday. (RELATED: NFL Announces Proposed Penalty For Kneeling For Anthem – The Fans Are Pissed) 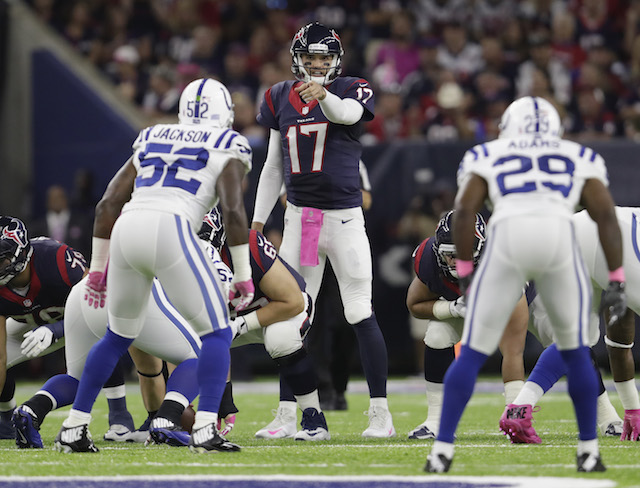 Brock Osweiler #17 of the Houston Texans points at D’Qwell Jackson #52 of the Indianapolis Colts at the line of scrimmage in the fourth quarter at NRG Stadium on October 16, 2016 in Houston, Texas. (Photo by Tim Warner/Getty Images)

“When the president — to me — has a personal agenda against the NFL. And what those guys are trying to get accomplished — it’s hard,” he added.

“But you have guys like Michael Jenkins from the Philadelphia Eagles that he’s a spokesman for the cause,” he continued. “I think he’s doing a phenomenal job of keeping the message alive. And it’s just unfortunate that the president feels the need to hijack the message that these guys are trying to convey.”

Jackson then admitted that there is not one single message that players are kneeling over and that some are refusing to stand for their “own personal reason.”

“So, there’s a ton of different messages out there, but I always go back to Michael Jenkins, cause he is the guy from the Philadelphia Eagles — that’s doing it for the reason I would do it. He’s doing it for social injustice and bring some awareness to those who don’t have a voice,” Jackson explained.

The comments came in response to Trump calling for players to be “suspended without pay” if they refuse to stand for the singing of the “Star Spangled Banner” following Thursday night’s preseason games that saw some players take a knee.

The NFL players are at it again – taking a knee when they should be standing proudly for the National Anthem. Numerous players, from different teams, wanted to show their “outrage” at something that most of them are unable to define. They make a fortune doing what they love……

…..Be happy, be cool! A football game, that fans are paying soooo much money to watch and enjoy, is no place to protest. Most of that money goes to the players anyway. Find another way to protest. Stand proudly for your National Anthem or be Suspended Without Pay!