Former FBI official Peter Strzok has reacted to his firing from the FBI, saying on a newly-created Twitter account that he was “deeply saddened” by the decision.

“It has been an honor to serve my country and work with the fine men and women of the FBI,” Strzok wrote, linking to a Go Fund Me page that has been set up to raise money on his behalf.

Deeply saddened by this decision. It has been an honor to serve my country and work with the fine men and women of the FBI. https://t.co/iET9SbeTrv pic.twitter.com/7VTswzjoxE

Jennifer Kay, a spokeswoman for Strzok’s attorney, confirmed the authenticity of the account.

Strzok’s lawyer, Aitan Goelman, said in a statement that the FBI’s deputy director decided to fire Strzok despite a recommendation from the bureau’s personnel division that he be suspended for 60 days and demoted. (RELATED: Peter Strzok FIRED From FBI)

The FBI’s Office of Professional Responsibility investigated Strzok over anti-Trump text messages he sent while working on the investigation into possible collusion between the Trump campaign and Russian government.

Strzok led that investigation, nicknamed Crossfire Hurricane, since its inception on July 31, 2016. He joined the special counsel’s investigation in May 2017 but was let go after the discovery of his text messages.

He sent messages referring to Trump as an “idiot” and mocking Trump supporters. Strzok also wrote to Page on Aug. 8, 2016 that “we’ll stop” Trump from becoming president.

Strzok appears to have been on Twitter for at least a month.

Though he has posted only once, he liked a series of tweets posted by anti-Trump pundits and celebrities following his marathon testimony before Congress on July 12. Strzok testified for 11 hours before the House Judiciary and House Oversight & Government Reform Committees about his text messages.

The first tweet Strzok “liked,” which was posted by actor Jim Carrey, compared South Carolina Rep. Trey Gowdy, the chairman of House Oversight, to “a vile insect.” The tweet includes a sketch of Gowdy with the body of an insect. 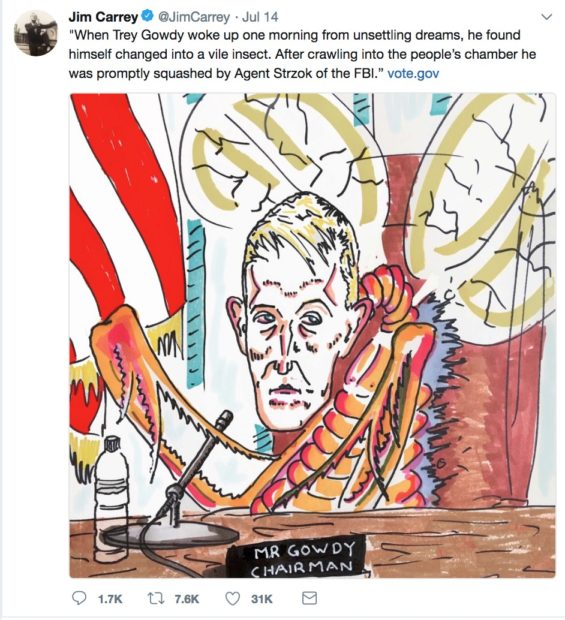 Other tweets liked by Strzok are from pundits praising the former FBI official’s testimony. And in another, Strzok endorsed a comment from author John Hodgman claiming that “establishment white dudes” have ignored “what a moral monster Trump was and is.”