Apple, history’s first trillion-dollar company, is arguing that a cluster of new buildings at its headquarters is worth only $200 in order to lower its tax burden.

The trillion-dollar tech giant claimed in an appeal the value of the “cluster of properties” is worth $200, not the $1 billion value given by the Santa Clara County’s tax assessor — elected officials who determine property value for tax purposes.

Another appeal claimed that the value of $384 million local officials gave the property was also worth $200, Business Insider reported Tuesday, adding the company might be the largest tax payer in the Santa Clara County, where the Cupertino, California, headquarters are located.

“In every country where we operate, Apple follows the law and we pay all the taxes we owe,” Apple CEO Tim Cook wrote in an open letter in 2016.

While there is nothing illegal, unethical, or uncommon about appealing property value assessments, The Chronicle noted, “Apple and other large corporations, county assessors say, border on abusing the system.”

“These are major cases, and publicly, they kind of go under the radar screen,” said a Santa Clara County Assessor, Larry Stone, adding that “there’s millions at stake” because Apple and others are prepared to spend millions on lawyers to appeal tax rulings. 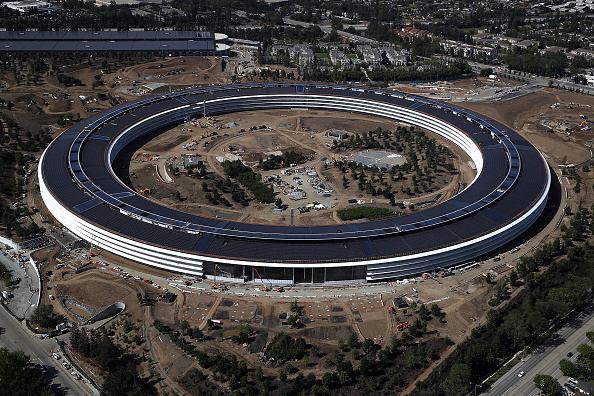 CUPERTINO, CA – APRIL 28: An aerial view of the new Apple headquarters on April 28, 2017 in Cupertino, California. Apple’s new 175-acre ‘spaceship’ campus dubbed “Apple Park” is nearing completion and is set to begin moving in Apple employees. The new headquarters, designed by Lord Norman Foster and costing roughly $5 billion, will house 13,000 employees in over 2.8 million square feet of office space and will have nearly 80 acres of parking to accommodate 11,000 cars. (Photo by Justin Sullivan/Getty Images)

The European Union ordered Apple in 2016 to pay 13 billion euros ($15 billion) in back taxes for receiving what it considered illegal state aid form Ireland, The Guardian reported.

Ireland offered the tech giant a sweetheart deal of a 1 percent tax rate. The usual corporate tax rate in Ireland is already one of the world’s lowest at 12.5 percent. The U.S. corporate tax rate, under the Tax Cuts and Jobs Act President Donald Trump signed into law on December 22, fell from 35 percent to 21 percent.