Since the repeal of “net neutrality” took effect on June 11, the U.S. internet speed has gone from 12th to 6th fastest in the world.

FCC chairman Ajit Pai announced late last year that he would be repealing the Obama-era internet regulations known as “net neutrality.” Following this announcement, the internet went into an absolute frenzy.

I hope you haven’t forgotten about #NetNeutrality. I haven’t. @SpeakerRyan must bring the resolution to the floor to restore net neutrality and keep the internet free and open.

Our #NetNeutrality bill, #SB822, was gutted today by the Assembly Communications Committee, b/f I was allowed to present the bill & b/f public comment. The eviscerated bill was passed over my objection. CA should lead on net neutrality, not pass a toothless bill. My statement: pic.twitter.com/DkZQTajftW

The Republican-controlled @FCC killed #NetNeutrality, but the fight for our free, open, and accessible internet is not over. The Senate has already voted to save net neutrality – and I’m proud to be doing my part by supporting similar legislation in the House. pic.twitter.com/bZnKsR9AAH

The repeal of Net Neutrality may have lasting consequences but the shining light is that most Americans are dead set on fighting to bring these rules back as fast as possible. #NetNeutrality pic.twitter.com/2Gy1LV4odC

The weakening of California’s #NetNeutrality bill shows what the forces we are facing are capable of. Every state deserves gold standard rules. That’s why the House of Reps should pass my CRA resolution immediately to reinstate net neutrality nationally.https://t.co/6daLeVsN7g

82% of Republicans and 90% of Democrats favor #NetNeutrality. There is currently a petition circulating on the floor of the House of Representatives to allow a floor vote to save net neutrality. Why won’t our representative, @RepTrey, sign it? https://t.co/8lZeVdIkuz

Even from the day of the announcement for the repeal, internet speeds have steadily been increasing. 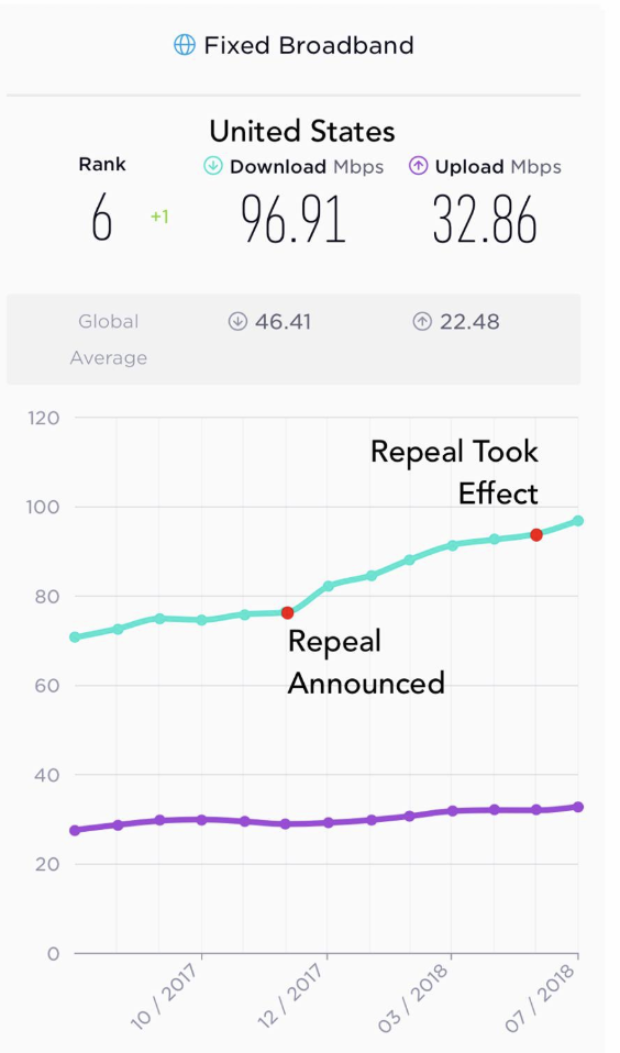 This is likely due to the fact that the repeal of net neutrality rules have allowed the market to dictate itself. This, in turn, has spurred competition and innovation which ultimately creates a better product for consumers.