“It’s 10am and I just ate a 711 big bite smothered in chili from the automatic chili dispenser plz hlp.”

” I swear to god so many white people seem to want to say ‘n*****’ SO BADLY. It’s like they see rappers using it and salivate over it. Do they chant it at night into their pillows, using their safe space to go all-in?” — Oliver Willis, senior writer, ShareBlue.

TWT columnist snaps at viewer who brands her a ‘propagandist’

“We discussed dating. I wasn’t aware this was propaganda. Get a life, please, and maybe a brain.” — Madison Gesiotto, columnist, TWT, attorney. She was responding to Tired Superman, who wrote, Thank god I missed it! @AriMelber why do you keep putting this propagandist on your show?”

Gesiotto’s quote stemmed from a panel on MSNBC’s “The Beat” with host Ari Melber Tuesday when the panel discussed dating in the Trump era. Gesiotto recalled a story when guy asked her out only to cancel the date because if her conservative political views. He later asked her out again, but she declined.

Omarosa has now been called a ‘dog’ and a ‘snake’

“New York Times columnist calls Omarosa a ‘snake’. He’s right – but why is that any more or less acceptable than Trump calling her a ‘dog’?” — Piers Morgan, columnist, The Daily Mail. He’s referring to NYT‘s liberal columnist Charles Blow.

Journalist drops breakfast on his foot

“Just dropped a pan of eggs on my foot. How is your morning going?” — Cameron Cawthorne, media writer, Washington Free Beacon. 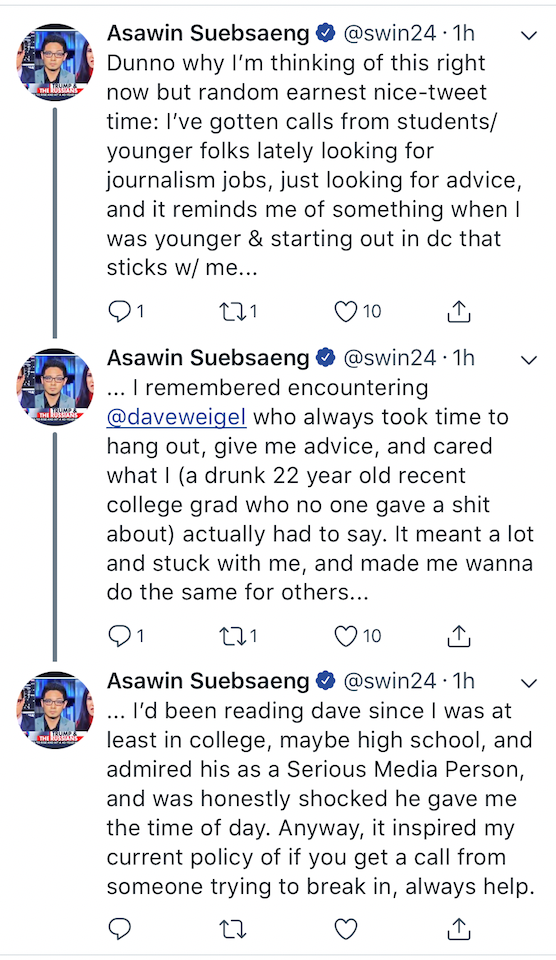 “You guys ever make like a horribly bad dating choice and then you see them later and you’re like holy shit I was really down on myself to do that.” — Cassandra Fairbanks, reporter, The Gateway Pundit.

Ivanka Trump…poses with a bunch of short women in Pittsburgh. Here.