The Washington Redskins’ Josh Norman said that the NFL and team owners should just ignore President Donald Trump because he’s “going to be out of office in two years.”

“You continue to do what you do because guess what? You have a product, and that product is fucking banking,”  the 30-year-old cornerback shared when asked how he thinks the league should deal with Trump’s criticism of players protesting during the national anthem, according to the Ringer Tuesday. (RELATED: NFL Announces Proposed Penalty For Kneeling For Anthem – The Fans Are Pissed) 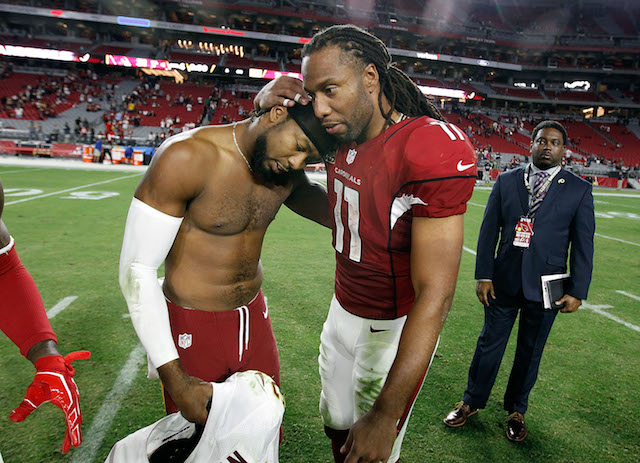 Larry Fitzgerald #11 of the Arizona Cardinals embraces Josh Norman #24 of the Washington Redskins following a game at University of Phoenix Stadium on December 4, 2016 in Glendale, Arizona. The Cardinals defeated the Redskins 31-23. (Photo by Ralph Freso/Getty Images)

“It’s the no. 2 product in the world outside of soccer — you cannot beat it. Those checks will keep coming regardless of what you do,” he added. “I wouldn’t tell them to do a fucking thing. This guy is going to be out of office in two years.”

“I think we’ll be okay. Trust me: The accounts will be fine,” he continued. “I wouldn’t put emphasis on it. Because the fans are going to come. It’s not like you’ve got scabs on the field like in 1987. So what if it’s a down year? Who gives a fuck? Next year you’ll be great. It’s not going to catastrophically disappear because one guy said something.”

It was not the first time Norman has voiced his thoughts on Trump’s opinion on players who kneel during the playing of the “Star Spangled Banner.”

Last August, after the president said owners should fire players who protest during the anthem, the NFL player said Trump was “not my president.”

“He was chosen, true,” Norman shared at the time, “but when a president acts like that, what do you say to that? That’s not someone that stands with dignity, pride, respect, honor.”

1
Tucker Carlson Insists Biden 'Will Not Be The Democratic Nominee.' Here's Who He Predicts Will Assume The Mantle
Media
2
Trish Regan Out At Fox Business
Media
3
Joe Biden Accused Of Sexually Assaulting Former Staffer: 'Penetrated Me With His Fingers'
Politics
4
UPDATED: Our Interactive Map Shows How Many Have Died From COVID-19 In Each State
US
5
Trump Praises Rachel Maddow 'For Putting Our Military On Full Display'
Media