“What rule did I break? I have no idea, and apparently they’re not going to tell me. How do I avoid breaking that rule again? Beats me. It’s tough to avoid repeating the infraction if I don’t know what it was,” wrote PJ Media’s Jim Treacher.

Treacher added that he saw several non-liberal handles temporarily suspended or locked out of their accounts Wednesday, some of whom work at conservative-leaning media outlets. 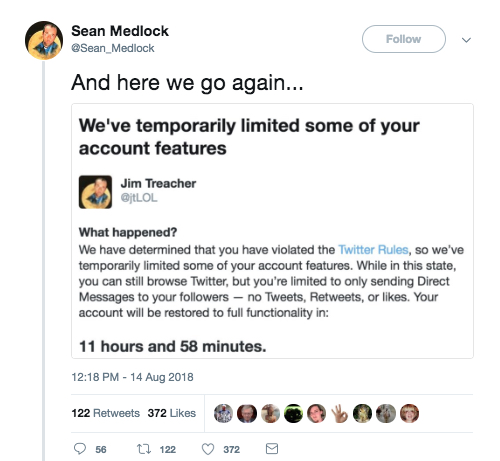 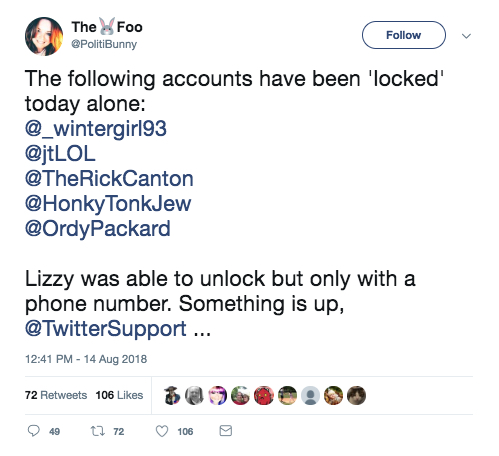 Twitter has been under fire for shadow-banning conservatives and issuing temporary bans on them. Shadow-banning is the use of algorithms to make accounts or content more difficult to find, effectively censoring handles without completely deleting them — giving the users the appearance they haven’t been censored. (RELATED: Twitter Hires Academic ‘Experts’ To Combat Anti-Islam, Conservative Posts)

“I don’t know what Twitter is up to. It sure looks to me like they are censoring people and they ought to stop it. And we’re looking at any legal remedies that we can go through,” Nunes said on Fox News’s “Sunday Morning Futures.”

Shadow-banning even caught the attention of President Donald Trump — who would cost Twitter $2 billion if he decided to stop tweeting, according to Bloomberg.

“Twitter ‘SHADOW BANNING’ prominent Republicans. Not good. We will look into this discriminatory and illegal practice at once! Many complaints,” the president tweeted July 26.

Twitter, for its part, denies it shadow-bans conservatives. TheDCNF reached out to Twitter for comment and will update this article if and when a response is issued.