Hundreds of firearms retailers may have to close soon because a powerful Canadian tech company, Shopify, recently decided it was anti-gun and issued an ultimatum: Do business our way or not at all.

Spike’s Tactical, a Florida-based firearms manufacturer and retailer, is just one of the businesses who received an alarming email from its online store management platform, Shopify— a company used by more than 600,000 merchants that offers a one-stop shop for retail businesses by handling everything from website development and marketing, to inventory management, payments, and shipping.

Cole Leleux, General Manager of Spike’s Tactical, said a three-sentence email from Shopify was the only notice Spike’s Tactical received alerting them to a new change in Shopify’s “Acceptable Use Policy” that will now “restrict the sale of certain firearms and firearm parts.” 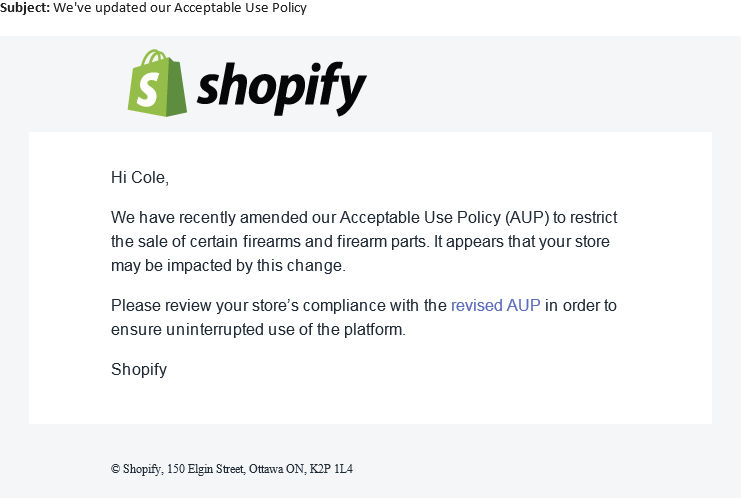 According to an article by Ammoland.com, some of the new arbitrarily amended rules in Shopify’s policy “now include banning the sale of semi-automatic firearms that have an ability to accept a detachable magazine and are capable of accepting more than 10 rounds. Additionally, unfinished lower receivers are also prohibited, according to the new rules. Most of Spike’s Tactical’ s products include AR-15 parts and full rifles, which would fall under those new restrictions.”

“It’s just crazy to go from no firearm policy to no guns overnight,” said Leleux, “We’ve been sitting back quietly while google stops us from advertising— we can’t advertise on Facebook, we can’t advertise on Instagram. We are a legal business in this country and I can’t use the most popular platforms to advertise.”

Aside from how Shopify’s new policy will affect his business, Leleux says what bothers him most is the hypocrisy. When deciding whether to contract with the company, Leleux says Shopify assured him it was firearm-friendly and he would have no problems. Shopify’s about-face came after Leleux spent $100,000 and signed the contract.

Gun owners should be outraged by companies who do business with American companies but don’t support our Constitution.