CBS News on Saturday changed its headline on a story about Texas Senate candidate Beto O’Rourke’s take on NFL player protests following a wave of backlash on social media. 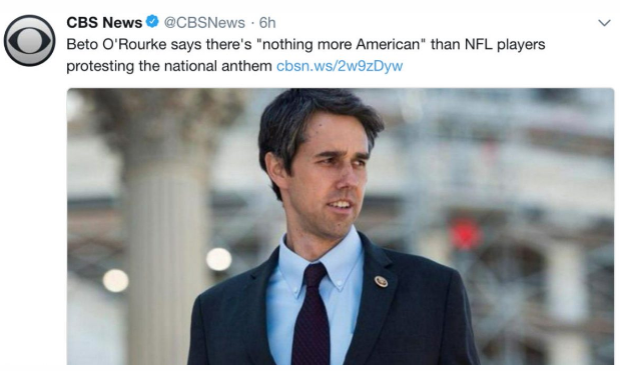 “I can think of nothing more American than to peacefully stand up or take a knee for your rights anytime, anywhere, any place,” O’Rourke said earlier this week, prompting his GOP opponent, Ted Cruz, to tweet his skepticism that the Democrat’s take would be a hit in conservative Texas. (RELATED: TRUMP JR. TELLS BETO O’ROURKE THAT ANTHEM KNEELING ‘WON’T FLY’ IN TEXAS, OFFERS ALTERNATIVE)

CBS News’ headline, however, drew the ire of players and media by drawing attention to players “protesting the national anthem” instead of what they consider fighting injustice.

This is a disgraceful failure by @CBSNews. No players are “protesting the national anthem.”
They are protesting police use of deadly force on unarmed black men. https://t.co/ufyrXTe0RB

NFL PLAYERS ARE *NOT* PROTESTING THE NATIONAL ANTHEM. How many times must it be said? https://t.co/sp7invf35B

How is this network news? Just the headline has a willful lie in it

I’m trying to figure out how you got this wrong @CBSNews, when @BetoORourke says IN THE VIDEO YOU ARE DISCUSSING that the protests are NOT about the anthem. Unless, of course, you’re intentionally misleading folks because you have an agenda. Or your journalism sucks. Which is it? https://t.co/l8xWOgXrQh

In addition to the tweeted statement, CBS News also added a sentence to the original article: “Players who kneel during the national anthem are protesting police brutality and racial inequality.”