During a stop at Nationwide Children’s Hospital in Ohio, where President Trump and First Lady Melania Trump toured a unit built for babies born addicted to opioids, the president visited with children and took a moment to sit down and color a picture of an American flag.

But what people noticed right away was that he had apparently colored that flag “wrong,” adding a blue stripe under one red stripe and left two that were white.

JFC, Trump! American flag’s stripes are red and white.
Trump should know this, considering the fit he throws when someone kneels at a football game “disrespecting the flag”.

The President has colored his flag wrong.

So @realDonaldTrump is so dumb he colored the American Flag wrong pic.twitter.com/J9FtOp5EHw

And then some saw something a little more sinister in his artwork. 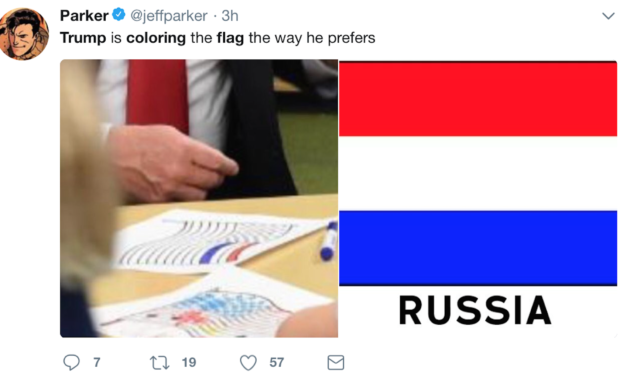 But the “Russian” flag in the picture, added for comparison, was actually the flag of the Netherlands.

The Russian flag, in contrast, has a white band at the top, then blue and then red.

Some suggested that the president added a blue line because of his vocal support for law enforcement, but the most likely explanation came from vocal Trump critic — and Captain America himself — Chris Evans: he just felt like doing it.

“I drew the duck blue because I’ve never seen a blue duck before, and to be honest with you, I wanted to see a blue duck.” https://t.co/Cy2Fr9KpfS