The Arizona Republican and war hero passed away on Saturday night and received beautiful tributes from his family, friends and colleagues.

Vox, however, decided to immediately criticize McCain for choosing Alaska Governor Sarah Palin to be his running mate during the 2008 presidential election.

“McCain empowered a demagogue who put the Republican Party on the path to Donald Trump,” politics editor Laura McGann wrote.

McGann blamed McCain for the rise of Donald Trump’s political fortunes, arguing that choosing a “demagogue” like Palin opened the door for a reality show-esque presidential candidate.

“McCain, who passed away at age 81, is remembered as a maverick, a man who crossed the aisle and built relationships with Democrats,” McGann said. “But he also betrayed his own values hoping to win a presidential election, and sent the Republican Party down the path to Trump.”

Vox tweeted out the article but later deleted the tweet following backlash from people who thought the criticism of McCain came too soon. 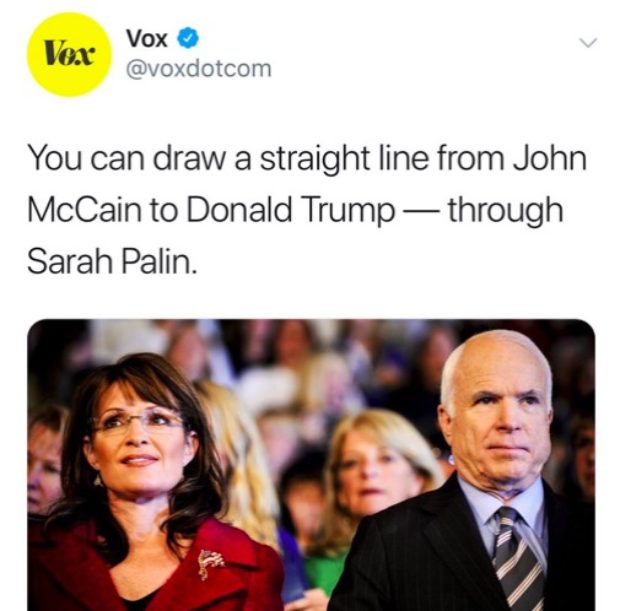 Yeah @ezraklein we’re not going to let you just memory hole that one. Your website is a disgrace. pic.twitter.com/1diH8sBAwW

Today, you should have the basic human decency to give those grieving the loss of an American hero space to breathe.

Publishing a political hit-piece upon the death of someone who gave so much for their country is really sick.

You’ll also be shocked af that this awful person is an editor at Vox
Fuck off, Laura https://t.co/HReKJiw8hu

– You can draw a straight line from John McCain to Donald Trump — through Sarah Palin.https://t.co/Vo7tZN9vlA pic.twitter.com/UVYn4dkj5s

Vox should be ashamed for writing this political BS hours after John McCain died. He’s a war hero for this country! The disrespect from these journalist with their political agendas is unreal! pic.twitter.com/6xDG4IcEjl

McGann defended her article, insisting that she won’t “pretend” that McCain never chose Palin as his running mate. 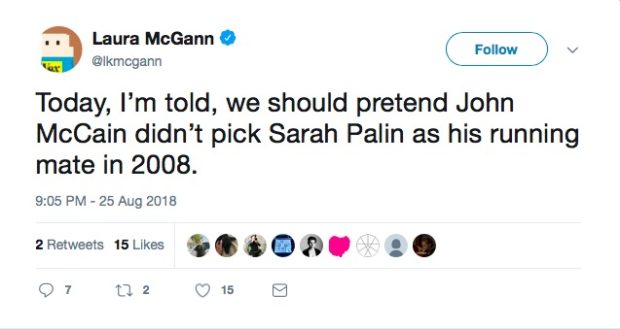 She also complained that people were calling her derogatory names over the piece.

Took 17 minutes to be called the c-word for pointing out that John McCain’s legacy includes empowering Sarah Palin.