Featuring short stoke, gas piston operation, the Alpha Wolf PCC (for “Pistol Caliber Carbine”) from Lone Wolf Distributors is something you need to shoot…a lot if you have a steady supply of 9mm or .45 ACP ammunition, as there are models chambered for either cartridge. Author Workman ran the carbine through its paces in a short range session. He found it to be a very accurate rifle. The receiver is made from 6061 T6 aluminum, and he discovered that it feeds 230-grain ball without fail.

It doesn’t like some JHPs, but stuff the magazine with 230-grain ball and this semi-auto rocks. I had a couple of failures to feed with Speer’s Gold Dot, but the hardball ammunition went in and out without a hitch. I also fired some loads with different JHP rounds that performed fine.

This is a “fun gun” that can certainly do double duty for home or business defense, predator control, competition and even small game hunting. The Alpha Wolf is built around a rotating, locking bolt system.

It accepts standard Glock pistol magazines, and the one sent with my test gun worked flawlessly, though it was kind of a thumb buster when it came to jamming in that last round. Take my advice; get hold of a device that helps in the loading of magazines. You will not be sorry. The muzzle of the 16-inch barrel is threaded to accept accessories, and it comes with a thread protector. Workman borrowed a set of sights — the Alpha Wolf does not come with sights — and he discovered that even with manual sights, this carbine can punch pretty tight groups.

The Alpha Wolf, I discovered during an all-too-brief range session, is pretty darned accurate even with add-on sights (my test gun came with no sights at all) that I borrow from my son. He’s an AR15 fan, and handed me a set with a tritium insert on the front post.

According to Lone Wolf literature, “The short stroke gas piston system eases recoil with the reciprocating mass resulting in quicker follow up shots, compared to a heavier, rearward force, blowback system.” I can say without fear of contradiction, that’s true. Felt recoil was almost non-existent, and as I cranked off rounds, I was delighted at the tight groups I was able to produce.

My guess is that if the Alpha Wolf is fitted with an optical sight, it will deliver accurate hits on any target within a hundred yards, which is not too shabby for a long gun launching a pistol-caliber cartridge. The magazine release is a side-mounted lever that works with an easy press. Lone Wolf Distributors designed this carbine with a telescoping stock. The Alpha Wolf accepts standard 13-round Glock pistol magazines. One comes with each gun. 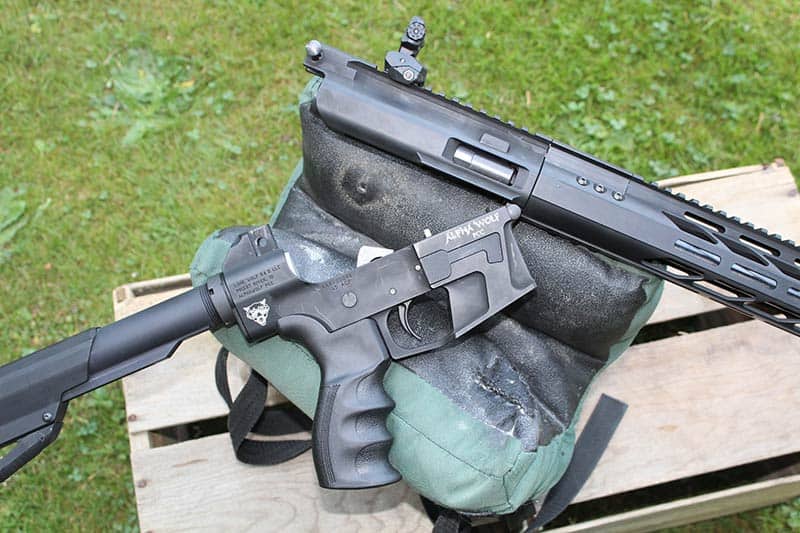 Takedown is a snap. Just pull the top pin and the receiver tips forward, essentially the same as an AR-type rifle.

This carbine comes standard with a 16-inch button cut barrel (a 10-incher is available) that is threaded at the muzzle for a suppressor, compensator or flash suppressor. It’s got a telescoping buttstock, the charging handle is on the left side of the receiver, and the proprietary handguard features an M-Lok rail system for accessories, including the aforementioned sights. Overall length of the standard model with the buttstock is 34 ½ inches. When the buttstock is depressed, the overall length is 32 inches.

At 6.4 pounds, the Alpha Wolf is an easy carry. It is designed with a proprietary receiver made from billet 6061T6 aluminum that seems to be pretty rugged. The carbine uses a standard AR/M4 fire control group, though the magazine release is a bit different from a standard AR platform.

Naturally, somebody will question why anyone might want a carbine chambered for a pistol cartridge. That’s a fair question, and one that I would quickly answer by saying that ammunition in either caliber is almost universally available. You’d have to look pretty hard to find a gun shop that doesn’t have a supply of 9mm or .45 ACP ammunition on the shelves. The bolt comes out with ease for cleaning. Those fire controls will look immediately familiar to anyone who has ever opened up a modern porting rifle. Rear look at the opened receiver with the retaining pin.

Once Workman got the hang of it, he managed groups like this. The single flyer was deliberate.

Cleanup? That’s what aerosols are for, along with standard brushes in the appropriate caliber. Then swab the bore, which is not chrome lined, according to Lone Wolf literature and finish it off with a lightly-oiled patch.

The Alpha Wolf should be right at home as an emergency gun to have along in a truck, SUV or even light aircraft.