Elon Musk suggested Tuesday that it was unusual that Vernon Unsworth, the British diver he called a pedophile, hasn’t sued him yet.

Unsworth is a British diver who helped rescue 12 soccer boys and their coach trapped in a cave in Thailand on July 10.

Musk’s tweet was in response to journalist Drew Olanoff, under Twitter handle @yoda, who accused Musk of not applying “facts and truth” to his unsubstantiated claim that Unsworth is a pedophile.

“[Y]our dedication to facts and truth would have been wonderful if applied to that time when you called someone a pedo,” Olanoff tweeted.

Unsworth claimed that Musk, who offered to send a mini-submarine to the cave to help rescue the soccer team, was just a “PR stunt” in a CNN video July 15. The British diver added that Musk can “stick his submarine where it hurts.”

Musk responded by calling him a “pedo guy”, or pedophile, in a now-deleted tweet on the same day.

The New York Times suggested that Musk is abusing recreational drugs and the sleeping medicine Ambien, citing anonymous sources familiar with the matter, the publication reported Aug. 16. (RELATED: Tesla’s Critics Are Having A Field Day With Elon Musk’s Most Recent Gimmick) 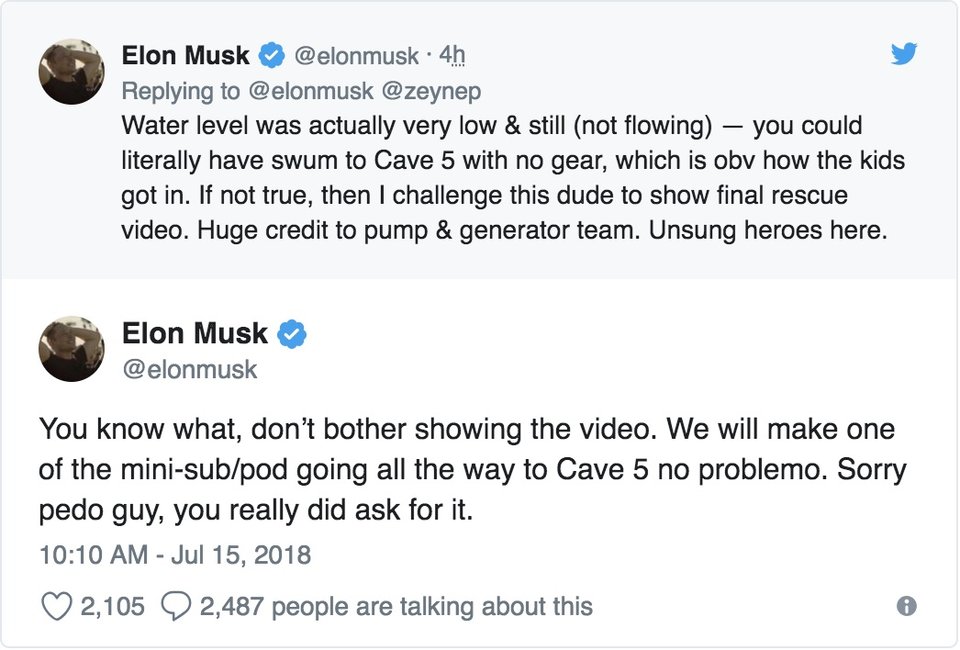 Musk eventually apologized for his comments on July 18, saying they were unjustified.

“His actions against me do not justify my actions against him, and for that I apologize to Mr. Unsworth and to the companies I represent as leader,” Musk tweeted. “The fault is mine and mine alone.”