News anchor Dan Rather said global warming is “causing real damage and death” in a tweet excoriating the media for supposedly ignoring “one of the most important stories of our time.”

Climate change is seldom far from my mind. It’s causing real damage and death. It’s so omnipresent it rarely tops the headlines, but it’s one of the most important stories of our time. Reality continues to close in and it will likely be devastating. Attention must be paid.

But is it really true that global warming “rarely tops the headlines”? Not really. (RELATED: He’s Baaaack! Bill Nye Returns From His Twitter Hiatus To Spread Climate Alarmism)

NRP and MSNBC anchor Chris Hayes were forced to defend their supposed lack of global warming coverage. Hayes said global warming segments had been a “palpable ratings killer” as a reason he didn’t do them very often. However, just because large networks didn’t focus much on global warming, since they’re driven by ratings, that doesn’t mean mountains of climate coverage isn’t generated every year.

2. Staffers working at @mediamatters + @climateprogress (where @emorwee got her start) have long manufactured this claim + driving a self-serving narrative on the Left that the news media is failing in its coverage of climate change.

4. The article by @emorwee claims that 5 yrs ago “no one was covering climate” & today the issue remains siloed. But even 5 years ago, the US elite press were publishing 200+ articles a *month* on #climate or 1 article/1.8 days. See data from @boykoff https://t.co/E7EmHLG7Oy

Thousands of articles have been written on the topic, including 252 articles from The New York Times alone in July 2018, according to University of Colorado researchers. Nisbet cited these figures.

And those figures likely don’t include the digital-only articles written at The Washington Post and other papers tracked by university researchers. Type “climate change” into your google browser, go to the “news” section and you’ll get 81.5 million results.

Here are the figures from University of Colorado researchers: 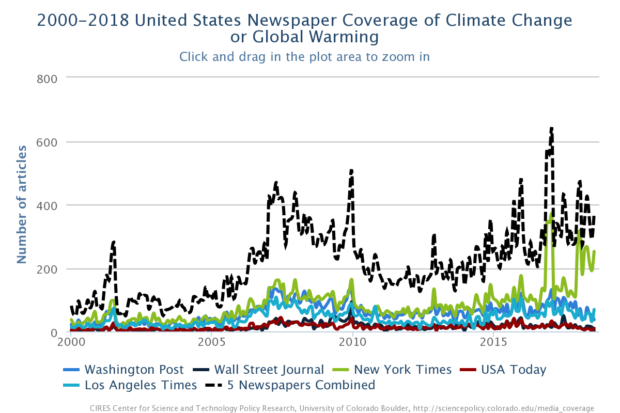 Source: Cooperative Institute for Research in Environmental Sciences, Center for Science and Technology Policy Research at the University of Colorado