Former Attorney General Eric Holder on Friday posed with Nation of Islam leader Louis Farrakhan in a photo that went largely unnoticed over the holiday weekend.

Farrakhan is a notorious racist and anti-Semite who has praised Hitler as a “very great man,” claimed that interracial marriage “mongrelized” the black race and repeatedly espoused conspiracy theories about “satanic” Jews.

The Nation of Islam published a photo on Twitter that shows Holder standing next to Farrakhan at Aretha Franklin’s funeral on Friday. 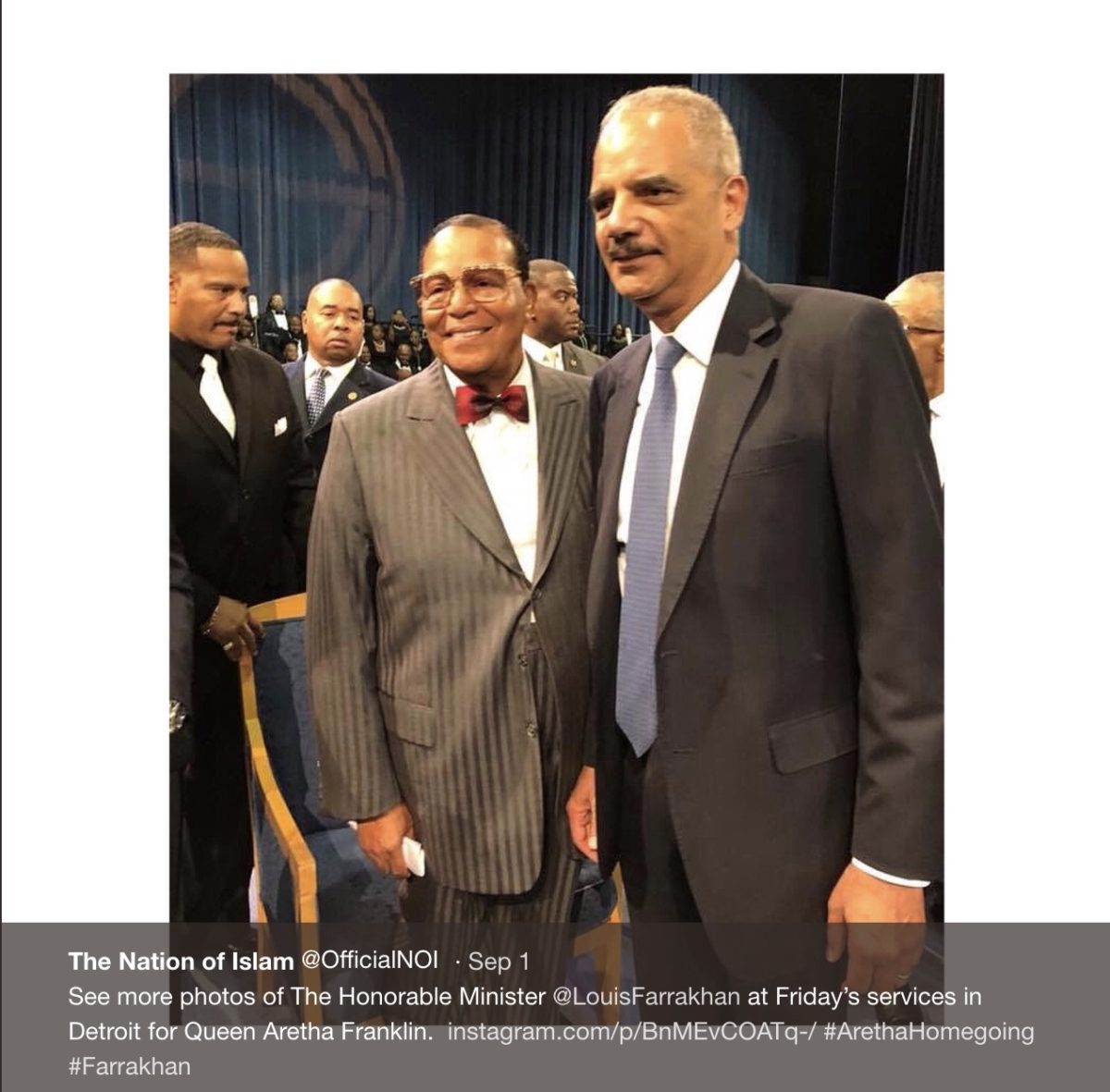 “When asked, Mr. Holder participated in a photo taken with the people on stage at the Aretha Franklin services. It was in no way an endorsement or expression of support for anyone,” NDRC spokesman Patrick Rodenbush told The Daily Caller News Foundation in an email.

Rodenbush did not answer whether Holder is willing to condemn Farrakhan’s anti-Semitism.

The photographer who took the photo worked for a Nation of Islam publication and withheld the photo until after Obama left office to avoid hurting his political career.

Following the publication of the Obama-Farrakhan photo, other prominent Democrats including Reps. James Clyburn of South Carolina and Maxine Waters of California were revealed to have attended events with Farrakhan and have since declined to denounce him.

Clyburn has said he is willing to consider running for Speaker of the House if Democrats retake the lower chamber in November’s midterm elections.

Illinois Rep. Danny Davis described Farrakhan in February as an “outstanding human being” and admitted the two had a personal relationship.

After Davis’s office falsely told the Anti-Defamation League that the congressman had been misquoted, he doubled down on his relationship with Farrakhan in a March interview with this reporter.

Davis easily won his primary in March despite the Farrakhan controversy.

Minnesota Rep. Keith Ellison repeatedly attended meetings with Farrakhan during his time in Congress, despite claiming that he had cut ties with the anti-Semite decades earlier.

Despite misleading the public about his Farrakhan ties, Ellison has remained the deputy chair of the Democratic National Committee (DNC) and last month won the Democratic nomination for Minnesota attorney general.