Nike stock was down 2.75 percent Tuesday morning after the company announced former NFL quarterback Colin Kaepernick as the new face of its “Just Do It” campaign.

The slogan for the campaign is, “Believe in something, even if it means sacrificing everything.”

The promotion of the former athlete, who protested racial injustice by kneeling during the national anthem, has led to major backlash against the sports company. A boycott was started and people began posting videos of themselves burning their Nike gear. 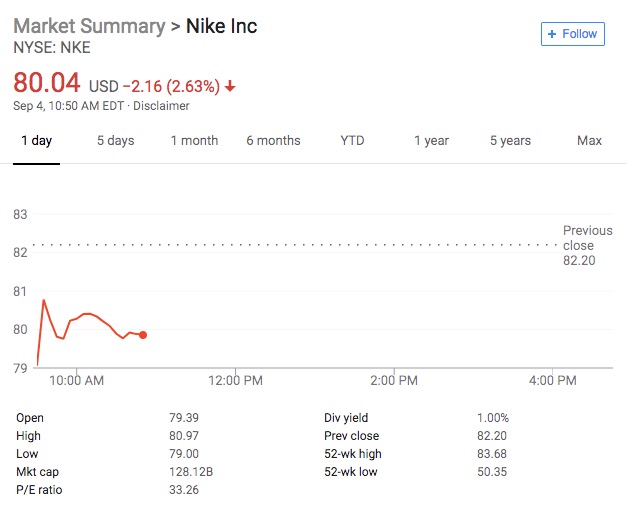 Kaepernick has not played in the NFL since the 2016 season. After two years, Kaepernick remains unsigned, and he has filed a grievance against NFL owners for colluding against hiring him. (RELATED: Tucker Carlson Slams Nike For Using Colin Kaepernick As A Pawn In Its ‘Decadent’ Scheme)

The kneeling protest spread throughout many teams in the league, and in 2017 President Donald Trump called for NFL players who kneel to be fired. The NFL has since passed new rules against protesting the anthem.