A county Democratic chapter in Missouri has a plan to resist President Donald Trump, and it involves rally tickets and baby balloons.

Cape Girardeau County Democrats told supporters in an email to snatch up tickets to Trump’s scheduled rally on Thursday, with the intent of leaving the stadium empty. Trump is set to campaign for Republican U.S. Senate candidate Josh Hawley.

“President Trump is coming to town, so it is time GEAR UP! Here is what is going to happen,” the Cape Democrats wrote. “RIGHT NOW go to: [Trump rally website] and get your two free tickets…. this will empty out the stadium.” 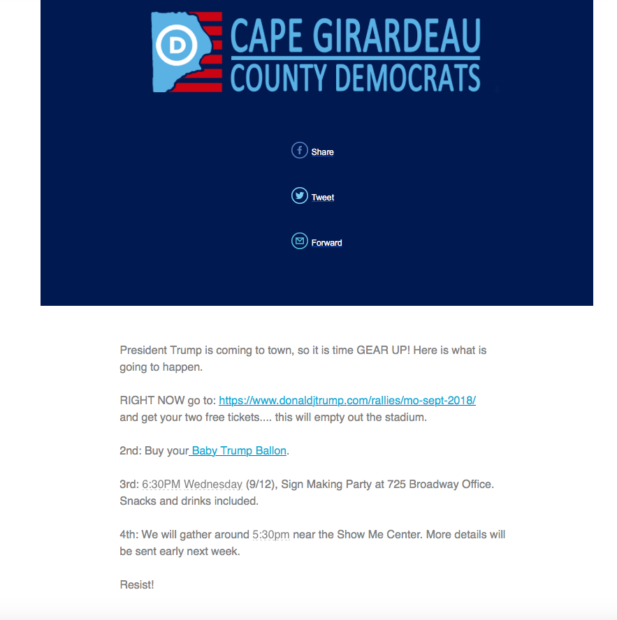 In addition to their attempt to keep tickets away from Trump supporters or people who will actually attend the rally, the Cape Democrats are planning a separate event with baby Trump balloons.

The Trump baby ballon first debuted in London, England to less-than-stellar results, as the balloon was nowhere near as giant as the fundraisers for its purchase suggested. (RELATED: Blown Up Trump Baby Is A Total Bust)

The Cape Democrats did not explain what they are going to do with the balloons in the email, ending the communication with the plea, “resist!”

The Daily Caller reached out to the Cape Girardeau Democrats for comment but did not receive a response by press time.