Livestock farmers in eastern North Carolina are doing their best to pump hog “lagoons” and make other preparations ahead of Category 4 Hurricane Florence’s predicted arrival Friday or Saturday.

Hog lagoons are a big concern for environmentalists, who worry that the pits of animal waste will overflow with floodwaters and contaminate nearby rivers, reported NPR. 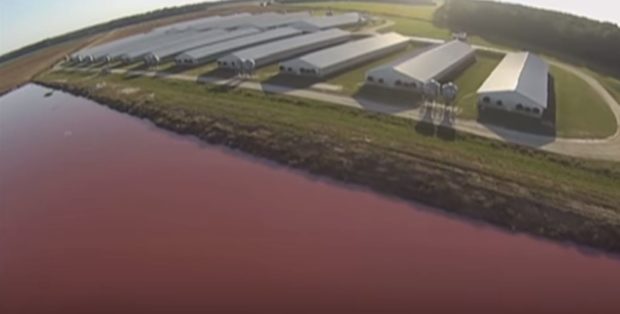 A drone captures footage of a hog farm and lagoon. YouTube screenshot/SpeciesismTheMovie

In areas where pigs outnumber people, farmers are draining hog waste out of the lagoons and spraying it in fields as fertilizer, reported NPR. The farmers hope the lagoons will be able to accommodate about three feet of rain, but meteorologists predict that Florence will dump much more rain on the area.

“I mean, we try to pump down as much as we can, but after that, it’s kind of in God’s hands,” Marlowe Vaughan of Ivy Spring Creek Farm in Goldsboro, North Carolina, told NPR. “We’re kind of at the mercy of the storm.”

North Carolina has more than 2,000 hog farms and 9.3 million pigs, reported McClatchy. When Hurricane Matthew blew through in 2016, spillage from sewage plants and livestock farms seriously set back cleanup efforts. Florence could kill thousands of hogs and other livestock, according to McClatchy.

Hurricane Floyd hit North Carolina as a Category 2 storm in 1999 and killed thousands of hogs and flooded more than 50 hog lagoons, reported McClatchy.