The U.S. surpassed Saudi Arabia to become the world’s largest producer of crude oil, according to preliminary estimates from the U.S. Energy Information Administration (EIA).

Indeed, U.S. drillers have continued to smash production records in 2018, including hitting 11 million barrels a day in output in July. That’s about double what the U.S. produced per day just eight years ago. 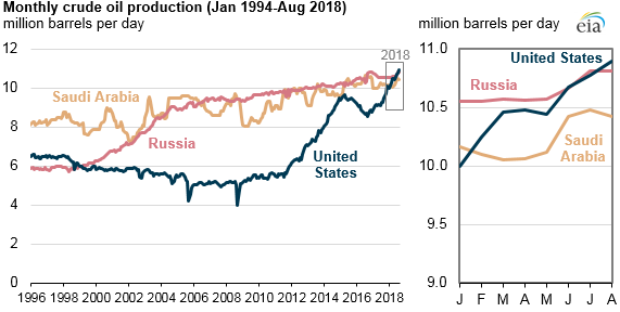 News from EIA comes after the Interior Department announced record-breaking revenues raised from an oil and gas lease sale in New Mexico. The lease sale raised nearly $1 billion in bonus bids, according to the department.

“Critics of the Administration’s American Energy Dominance policy often falsely claim there is little to no interest in Federal oil and gas leases,” Interior Secretary Ryan Zinke said in a statement.

“Today they are eating their words and once again President Trump’s policies are bearing fruit for the American people,” Zinke said.

“Much of the recent growth has occurred in areas such as the Permian region in eastern Texas and western New Mexico, the Federal Offshore Gulf of Mexico, and the Bakken region in North Dakota and Montana,” according to EIA.