Democratic Sen. Dianne Feinstein of California, the Judiciary Committee’s ranking member, spent much of the day criticizing committee Republicans for moving too hastily. But by Tuesday afternoon, she told reporters that the trauma of the event Ford described may have adversely affected her memory.

From colleague Connor Marley. Feinstein on Ford. Says Ford “is a woman that has been, I think, profoundly impacted, on this..I can’t say that everything is truthful. I don’t know.”

The senator subsequently clarified that she believes Ford is credible.

Feinstein just now clarifies: “Look I believe she is credible. What we have wanted is an investigation carried out to look at the facts before there was a hearing. The republican majority is apparently not going to do that. But based on what I know at this stage she is credible.” https://t.co/yDldaHTrDe

Early Tuesday, her office told reporters that the GOP was wrong to limit public testimony to Kavanaugh and Ford, urging them to call other witnesses who can speak to the character of the parties or the events alleged. (RELATED: Accuser’s Friends Reveal She’s Discussed Encounter With Kavanaugh In The Past)

“Chairman Grassley today said there would be only two witnesses invited to testify at the Kavanaugh hearing next week on sexual assault allegations,” Feinstein said in a statement. “Compare that to the 22 witnesses at the 1991 Anita Hill hearing and it’s impossible to take this process seriously.”

Republican Judiciary Committee lawyers have begun conducting interviews in advance of Monday’s hearings. In particular, committee lawyers will use a Washington Post story substantiating the allegations as the basis for future interviews. Democrats are not participating in this process, according to a spokesperson.

Kavanaugh took questions from the committee by phone on Monday night. A Senate spokesperson described his answers as “forthright and candid.”

Perhaps the most relevant witness for the committee’s purposes is Mark Judge, a Georgetown Prep student who Ford says was present when Kavanaugh attacked her. Judge’s attorney sent a letter to the panel Tuesday asserting Kavanaugh’s innocence but declining to participate in Monday’s proceedings. 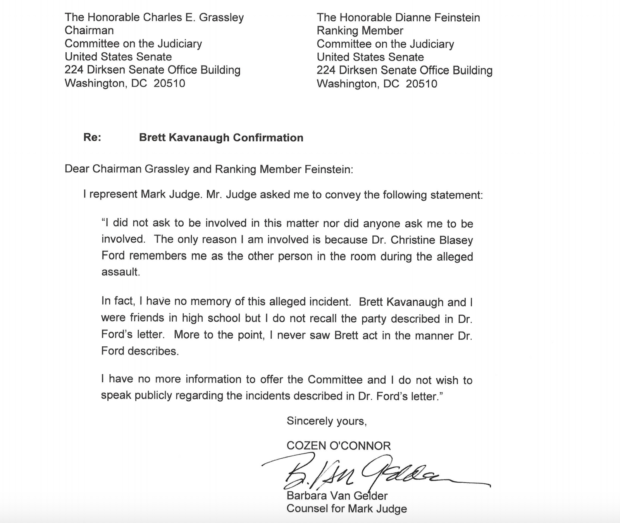 As of this writing, it is still an open question whether Monday’s hearing will actually take place. Debra Katz, Ford’s attorney, has yet to confirm that they will appear, or even that they are in receipt of the invitation.

Republicans have offered to hold the hearing in a public or private setting, as Ford prefers.

It was not immediately clear if the special session would proceed without Ford, though Republican senators gave no evidence to the contrary and Judge Kavanaugh is said to be eager to defend himself.

But Democrats are adamant that action on the Kavanaugh nomination should be delayed until federal investigators have dispensed with a probe. They further say that Ford is entitled to privacy and under no obligation to answer the committee’s summons. (RELATED: If Kavanaugh Goes Down, Its Near Impossible To Confirm A New Nominee This Year)

“Why should we participate in the victimization of someone who has the courage to come forward?” Democratic Sen. Mazie Hirono of Hawaii said Tuesday. “And she is under absolutely no obligation to participate in a smearing of her and her family.”

“I just want to say to the men of this country just shut up and step up,” she added. “Do the right thing for a change.”

A criminal investigation would be unusual, as it is not clear if the Bureau even has jurisdiction over the issue and what the relevant statute of limitations are. However, Democrats argue the FBI could explore the allegation to the extent it bears on the judge’s government background check.

This story was updated to include Sen. Feinstein’s clarification on her remarks about Dr. Ford.