Even before Hurricane Florence barreled into the North Carolina coast, a misleading claim about the storm and global warming echoed across the internet.

Florence made landfall in North Carolina as a Category 1 hurricane on Friday, but the day before, The New York Times published a video claiming the storm had formed in “unusually warm waters” in the Atlantic Ocean, heated up by man-made global warming.

“Ocean surface temperatures along Florence track were abnormally cool for most of its life-cycle partly due to the unusual, higher latitude of the storm,” Maue tweeted on Tuesday night. “The integrated [sea surface temperature] track-based anomaly averaged from Sept 4-11 was 0.6°C below 1985-2017 ‘normal.'”

Florence formed in colder than normal waters in the eastern Atlantic Ocean. Florence also reached major hurricane strength (Category 3 or higher) in cooler waters, before heading into warmer waters where it didn’t do what weather forecasters expected — it weakened and fell apart.

In fact, what’s amazing is how strong the storm got and how long it stayed together over “marginal” ocean temperatures, Maue tweeted. (RELATED: Hurricane Florence Dumped 13 TRILLION Gallons Of Rainfall On Carolinas, Virginia)

This track coolest since 1996 … more typical of cold mid-1980s… pic.twitter.com/x7fNCMz2Fk

Florence intensified from a Tropical Storm — the briefly reached Category 4 on Sept 5 before being sheared apart about 24-hours later.

The National Hurricane Center initially forecast Florence to hit land at Category 3 or 4 strength on the Saffir-Simpson scale, making it a major hurricane at landfall. Forecasters likely expected the warmer waters close to the U.S. coast to intensify the storm.

Instead, Florence weakened as it approached the Carolinas, despite the warmer waters close to the coast. Florence made landfall as a Category 1 hurricane, though the storm still brought heavy rainfall and flooding across the southeast.

Mann blamed an “ocean heat wave,” linking to a National Oceanic and Atmospheric Administration (NOAA) article published about one week before Florence made landfall. 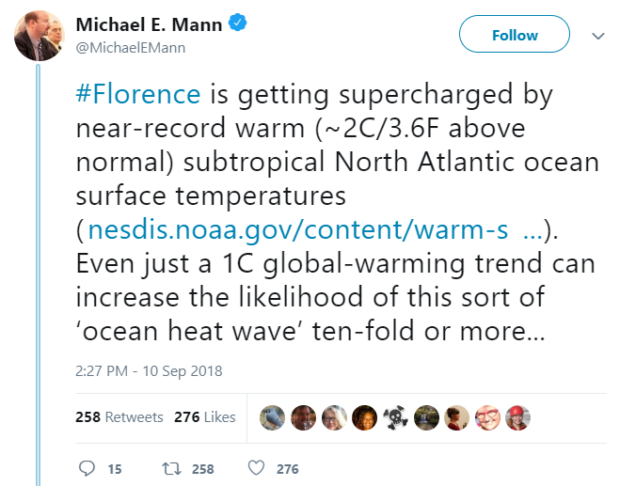 However, the article Mann cited as evidence is referring to the warm coastal waters of New England and eastern Canada — hundreds of miles from Florence’s actual track.

But even the warmer waters near the U.S. coast were actually close to the 30-year average, Maue said.

Florence regained Category 4 strength of 120-knots late on September 10th over > 28°C sea-surface temperatures — but did NOT intensify further even though “much warmer” bathtub water was on track to North Carolina.

Florence expanded in size — but not max winds until landfall pic.twitter.com/varQwXpaK6