In the wake of the Cohen and Manafort plea deals, Democrats have become quite the champions of restrictive campaign finance rules.

Hoyer promoted the Government by the People Act — a radical bill that would drastically infringe on Americans’ rights to make political donations — and the DISCLOSE Act, which eradicates the anonymity that protects many charitable donors from the Left’s demonstrated harassment, simply for promoting ideas the Left doesn’t agree with.

Montana Democratic Sen. Jon Tester, who’s staring at defeat in the November midterms, has turned to campaign finance reform as his signature issue. Regularly describing our current system as “broken,” Tester vows to “return our democracy to the people.”

Of course, Tester refuses to blame Hillary Clinton for helping break it — and stealing his low-rent concept of democracy from Democratic primary voters in 2016.

Nine months ago this week, the Committee to Defend the President filed a complaint with the Federal Election Commission (FEC), accusing the Democratic establishment of orchestrating the most elaborate money laundering scheme in U.S. electoral history. In what amounts to the largest campaign finance scandal in history, the Hillary Victory Fund, Democratic National Committee (DNC), and dozens of Democratic state parties collaborated to steer $84 million in illegal straw man contributions to the Clinton campaign.

The money came in the form of excessive six-figure donations from the likes of “Family Guy” creator Seth MacFarlane, fashion icon Calvin Klein, and over 1,000 liberal mega-donors who sought to carry favor from the Clinton machine. 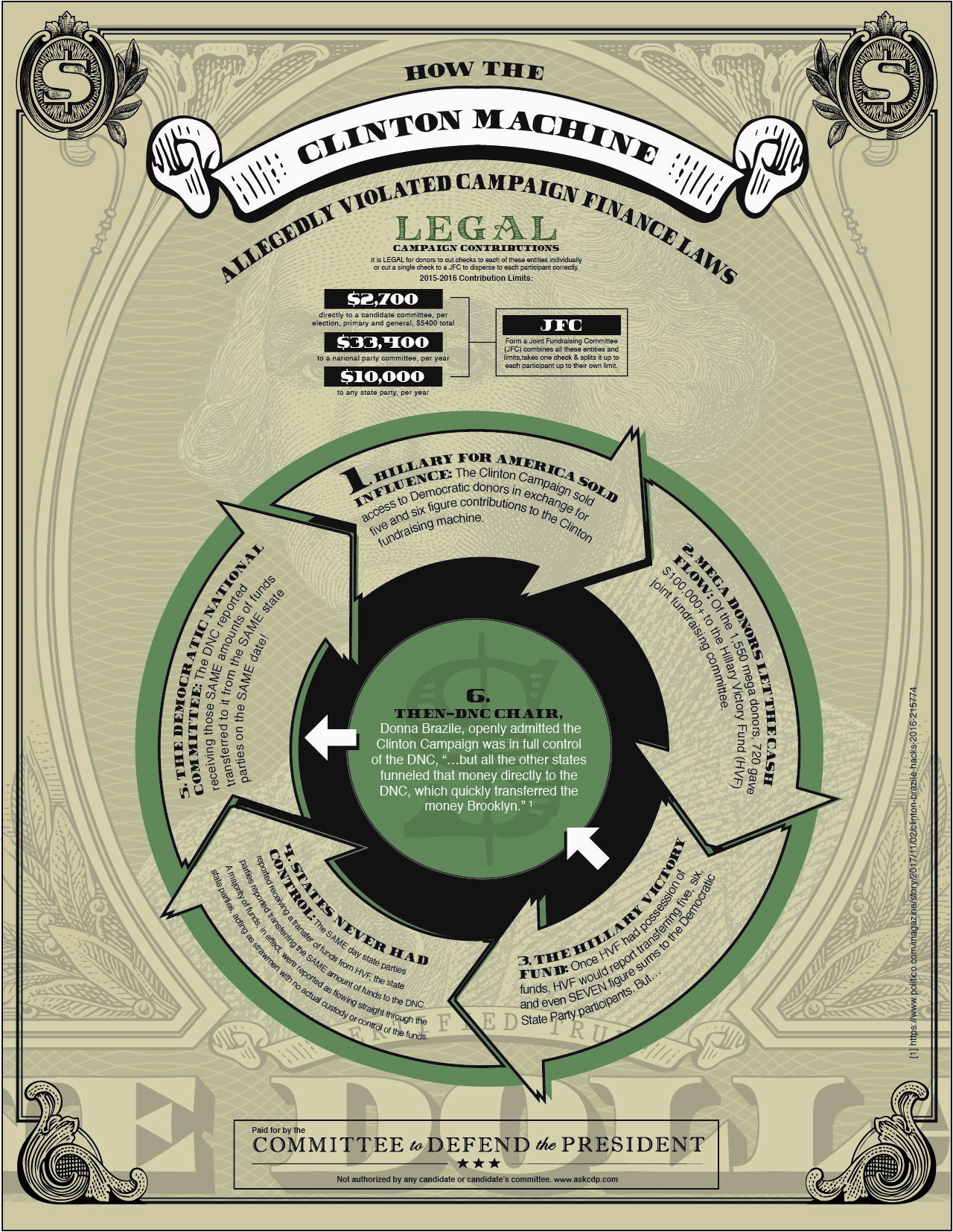 In 2012, conservative commentator Dinesh D’Souza was prosecuted, convicted, and forced to serve eight months in a community confinement center and five years of probation after he violated campaign finance law. The conviction was predicated upon $20,000 in illegal straw man contributions. That’s right: A $20,000 campaign finance violation — roughly 4,200 times less money than the Clinton machine laundered.

After the FEC refused to act on the highly detailed, 100-page complaint within a statutory 120-day timeframe, the Committee to Defend the President sued the FEC to force action, claiming the agency’s failure to act is “arbitrary, capricious, contrary to law, and an abuse of discretion.”

Nine months since the complaint was filed, the investigation into Clinton’s transgressions remains ongoing. Criminal and civil liability — for Clinton and more than 1,000 of the Left’s most influential donors — remains a possibility.

From swanky book deals to hefty pay-offs and shady foreign payments to the Clinton Foundation, Hillary Clinton is the living embodiment of political activism for personal gain. She has made her millions exploiting the trust of Democratic voters who cast their votes for her, and continue to idealize her.

And yet she continues to escape accountability, while her fellow Democrats refuse to call a spade a spade and federal regulators decline to act. In nine months, the FEC has done nothing. The Department of Justice has done nothing. And, of course, the mainstream media has said astonishingly little.

Take it as lesson: Campaign finance “reformers” like Hoyer and Tester only care about campaign finance reform when it suits them politically. And the federal regulators who demand accountability when it comes to President Trump apply it selectively.

For as long as Clinton escapes accountability, their outrage is just politics as usual.

Dan Backer is a veteran campaign counsel, having served more than 100 candidates, PACs, and political organizations, including the Committee to Defend the President. He is founding attorney of political.law.