Lawyer Michael Avenatti said Tuesday that he was “forced” to make his Twitter account private after receiving some unwelcoming comments, which he says are due to his recent representation of an anonymous woman claiming Judge Brett Kavanaugh was involved in gang rapes in high school.

Avenatti tweeted Sunday that he represents a woman with “credible information” regarding Kavanaugh and has since demanded the Senate Judiciary Committee not only question Kavanaugh on his involvement in a “train of men” that he claims drugged and gang-raped women in high school, but also asked the committee to allow more witnesses to testify. 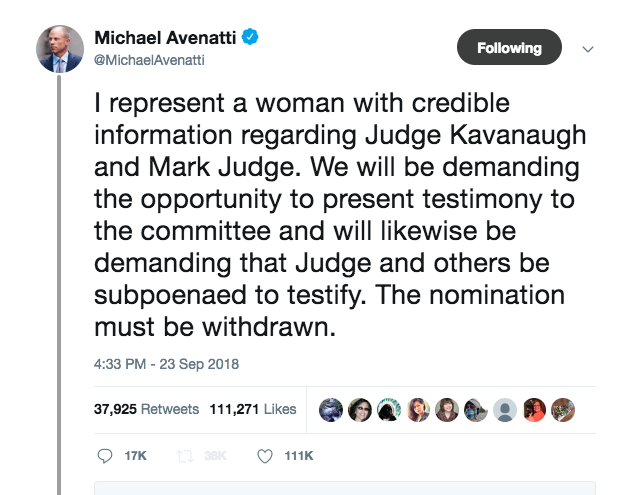 Since his announcement, Avenatti has attempted to prove the credibility of his accusations without revealing who his client is and without providing any evidence so far.

Avenatti’s claim made without any proof apparently has not sat well with the Twitter community. Avenatti tweeted Tuesday that he’s been “forced” to make his account private “because the bots and Trump trolls are out in full force due to my representation re Kavanaugh.” 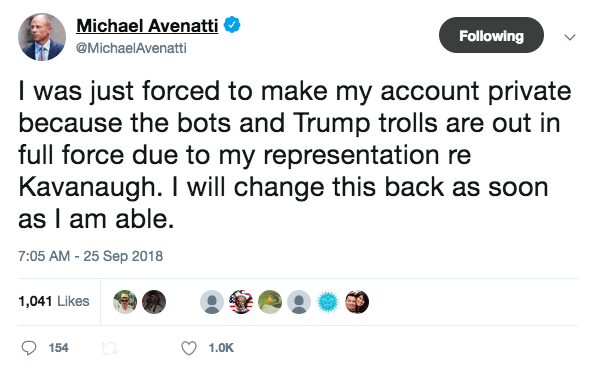 “I would suggest ignoring him until he comes forward with real evidence, which he promises is coming in the next few days,” Washington Bureau Chief for The Intercept, Ryan Grim, wrote in a newsletter emailed to readers.

“If Michael Avenatti has any evidence, he should come forward promptly. If he has a client who has relevant information, I welcome hearing from him,” Democratic Sen. Chris Coons of Delaware, a member of the judiciary committee, told The Daily Beast.

“Who wants to bet Michael Avenatti has more skeletons in his closet than any of these people he’s ‘heroically’ going after?” asked CRTV’s Allie Stuckey.

A senior Democratic aide also told The Daily Beast that Avenatti “has a tendency to sensationalize and make his various crusades more about himself than about getting at the truth.”

Another Democratic source told the outlet that while he or she believes he represents a credible allegation, Avenatti has “undercut it. If he had vetted it through a media outlet and had journalists represent it in a well-reported way or have the committee introduce it, it would have been better.”

Avenatti says he will make his Twitter public as soon as he is able to.