“Disagree with me all you want. Don’t bring my kid into the equation.”

— CNN’s S.E. Cupp, who was replying to “GirlGood” who wrote, “S.E. you have terrible skills at reading people. Your kids will be able to get anything over on you! Just my opinion.” 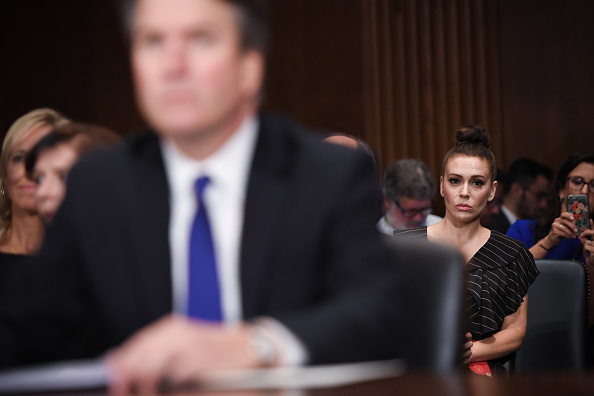 Actress Alyssa Milano listens as Brett Kavanaugh, U.S. Supreme Court associate justice nominee for U.S. President Donald Trump, testifies during a Senate Judiciary Committee hearing in Washington, D.C., U.S., on Thursday, Sept. 27, 2018. Christine Blasey Ford said she is “one hundred percent” certain that Kavanaugh is the person who sexually assaulted her when they were teenagers, and she told a Senate committee that he and his friend laughed at her expense during the attack. Photographer: Saul Loeb/Pool via Bloomberg

MSNBC’s Hayes is ready for a fight

“I’m in the mood to fight with people on the Internet all day. Someone lock my phone.” — MSNBC host Chris Hayes.

To which actress Alyssa Milano replied, “I got your back.”

Milano sat in the hearing room… as a guest of Sen. Dianne Feinstein (D-Calif.). She wrote, “Oh God, I wish there could be an audience q&a portion of this hearing.”

“We are now talking about farting, beer, and the f-word during a senate hearing. What a joke.” — Asche Schow, senior editor, RealDailyWire.

IN THE HEADLINES: How the pubs handled Sen. Lindsey Graham’s (R-S.C.) outburst

Jezebel: “Fuck the Fuck Off Lindsey Graham, You Fucking Misogynist.”

One of their so-called tragedies: Watching the news.

Another: “Feeling numb or even desensitized doesn’t mean you’re broken or callous.”

“Shorter Rachel Mitchell: I didn’t ask for this.” — Sam Stein, The Daily Beast.

“I worry half an hour is not a long enough lunch break for Rachel Mitchell to eat a whole puppy.” — Bess Kalb, TV writer.

“Rachel Mitchell should also be ashamed for her participation in this fiasco. She is doing a disservice to her entire profession.” — Amanda Marcotte, politics writer, Salon.

“As this comes to a close, Rachel Mitchell is going to need a closing statement that pulls a rabbit out of her hat. I don’t understand the point of her questions.” — Ari Fleischer, former White House Press Secretary.

“Did these questions originate with the senators who have yielded time to Mitchell? In other words, is she asking THEIR QUESTIONS on their behalf? Or is this a line of questioning she’s pursuing on her own?” — Mike Madden, The Washington Post.

“Rick Santorum just now on @CNN: ‘let’s just be honest…there are other alternatives than Brett Kavanaugh who could be a Supreme Court Justice.'” — Maria Spinella, CNN Tonight with Don Lemon.

“I smoke a lot of cigarettes normally but today the number of cigarettes I am smoking is truly some next level shit.” — Eve Peyser, VICE.

“A woman just told @LindseyGrahamSC she was raped. He said, as he headed into an elevator, ‘I’m sorry. Tell the cops.'” — Emma Dumain, McClatchy.

“‘I’m a single white man from South Carolina and I’m told I should shut up. But I will not shut up, if that’s OK,’ Graham says.” — Burgess Everett, Politico.

Hugo Gurdon, editorial director of the Washington Examiner, said, “Seth is an admired journalist whom it will be great to have on our team. His work at the New York Post has given him hands-on experience commissioning powerful articles from a range of excellent writers. He will be a tremendous asset bringing these high-level journalistic skills to the Washington Examiner magazine.”

“VERY IMPORTANT: If you are a Republican, call your Senator’s office as soon as you wake up today. Call them & say, ‘I swear to God if you don’t vote for Brett Kavanaugh you will never get my vote again and I will never give you any more money.’ CALL!” — Laura Loomer, investigative reporter who was banned from Uber for saying she never wanted another Islamic driver.