A Friday USA Today article stating that Judge Brett Kavanaugh “should stay off basketball courts for now when kids are around” was re-edited the next day and the original tweet to the piece was deleted.

“The U.S. Senate may yet confirm Kavanaugh to the Supreme Court, but he should stay off basketball courts for now when kids are around,” USA Today sports reporter Erik Brady wrote in the piece which has since been changed to an opinion column.

“A previous tweet contained a statement that has since been edited out of a sports column,” tweeted USA Today on Saturday. “That tweet has been deleted. The updated opinion column and editor’s clarification are here.”

A previous tweet contained a statement that has since been edited out of a sports column. That tweet has been deleted. The updated opinion column and editor’s clarification are here: https://t.co/zhFOWMIjCb

Here’s a screen grab of what the original article looked like: 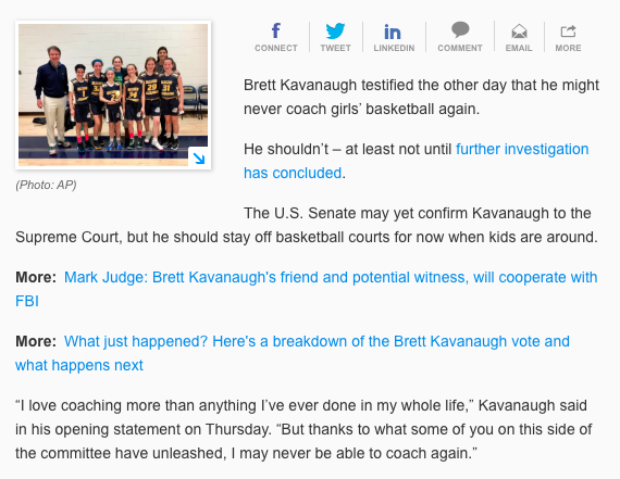 The updated column included an editor’s note explaining the re-editing and addressing the intent of the commentary.

Editor’s note: Supreme Court nominee Judge Brett Kavanaugh has told members of the Senate Judiciary Committee he loves coaching his daughters’ girls basketball teams, but said in testimony Thursday “thanks to what some of you on this side of the committee have unleashed, I may never be able to coach again.” The intent of this commentary was to address that question. The column was re-edited to more closely reflect that intent and labeled to reflect it as the writer’s opinion.

In it, Brady doesn’t write directly that Kavanaugh should not coach youth basketball, but does quote a Safesport spokesman who says a “credible allegation of sexual abuse” could “lead to an investigation, even where there are no formal charges brought by law enforcement.”

“He said the burden of proof in such cases is the civil standard of more likely than not, rather than the criminal standard of beyond a reasonable doubt,” wrote Brady.