Former Trump aide Michael Caputo clarified his comments about Black Lives Matter and offered proof after many on social media and a writer on two left-wing websites accused him of stoking racial fears.

“I did not say BLM leaders called for rioting, as some are accusing me of saying on CNN,” Caputo wrote in an email to The Daily Caller, stating his comments were worded “carefully.”

“But when [Kavanaugh] is confirmed – if he is – I’m concerned,” Caputo told CNN host Fredricka Whitfield on Sunday. “We see, you know, social media accounts associated with Black Lives Matter talking about how they’re going to riot. So, that is apparently where we’re going from here.” (RELATED: Former Trump Advisor: If FBI Can Investigate Hillary’s Emails In A Few Days, A Week Should Be No Problem For Kavanaugh)

Caputo made the comment during this segment, at the end of the clip:

“Michael Caputo On Kavanaugh: Black Lives Matter Will ‘Riot’ When He’s Confirmed,” read the CrooksAndLiars.com headline, paired with a tweet that called it “racially-coded fear mongering.

There’s no issue that a Trumper can’t throw in a little racially-coded fear mongering. https://t.co/xpwUHjgnlN

In an email to The Daily Caller, Caputo sent a screengrab of the tweet he was referring to, from Black Lives Matter activist Danielle Muscato: 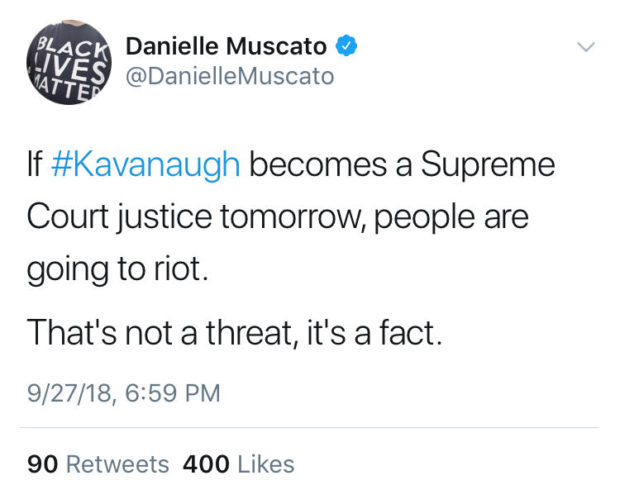 If #Kavanaugh becomes a Supreme Court justice tomorrow, people are going to riot.

“I also tweeted that it doesn’t make much sense that BLM would riot,” Caputo wrote in his email, referring to the below tweet:

You’re right, it’s confusing. Awful things happen to minorities when Democrats demand condemnation without due process, like they did with Emmett Till.