Senate Judiciary Chairman Chuck Grassley was briefed on the FBI supplemental report on Brett Kavanaugh and declared, “There’s nothing in it that we didn’t already know.”

The senator was briefed on the report Thursday morning and released a statement soon after, promising a vote for Kavanaugh.

“It’s time to vote. I’ll be voting to confirm Judge Kavanaugh,” he said.

Grassley also said, “I trust that career agents of the FBI have done their work independent of political or partisan considerations. That’s exactly what senators from both sides asked for. Now it’s up to senators to fulfill their Constitutional duty and make a judgement.”

Grassley continued, “The Senate is not a courtroom. But the our nation’s tradition of fairness still applies. A presumption of innocence is how the American justice system works and it should remain our guidepost in the Senate. Abandoning that principle would cut a sad path for the Senate as an institution.”

“Senators ought to wipe away the muck from all the mudslinging and politics and look at this nomination with clear eyes,” Grassley concluded.

The White House relayed the FBI report to the Senate, and senators began reviewing it Thursday morning.

“We feel very confident that when the senators have an opportunity to review this material as they have already — they’re just beginning to right now — that they are going to be comfortable voting to confirm judge Brett Kavanaugh,” Shah said Thursday morning on CNN.

“An FBI supplemental background investigation that did not include an interview of Dr. Christine Blasey Ford — nor the witnesses who corroborate her testimony — cannot be called an investigation,” her lawyers said in a statement. “We are profoundly disappointed that after the tremendous sacrifice she made in coming forward, those directing the FBI investigation were not interested in seeking truth.”

Senate Majority Leader Mitch McConnell took a step Wednesday night toward a vote Friday on advancing Kavanaugh’s nomination. The senators will vote Friday on whether to move to a final vote.

“There will be plenty of time for members to review and be briefed on the supplemental material before a Friday cloture vote,” McConnell said. 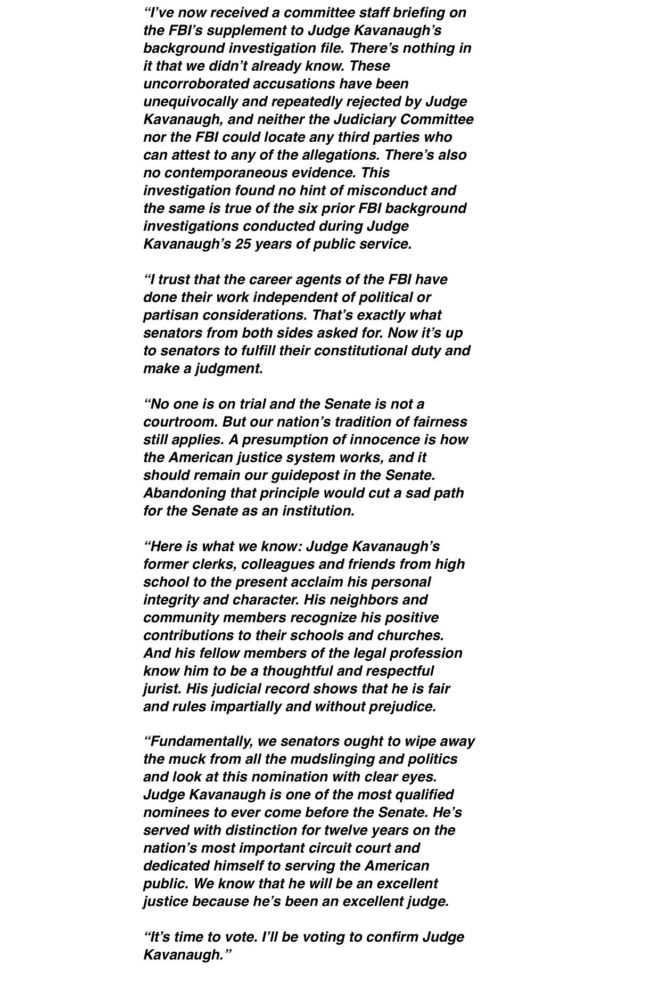