Fox News Correspondent Gillian Turner explained how the allegations against Brett Kavanaugh and the ensuing chaos has actually helped Republicans in regards to the midterm elections during her appearance on Tucker Carlson’s show Thursday night.

“Just two months ago there was a 10-point gap between the Dem and Republican interest in the midterms but that playing field leveled off. Compared to early September, now the number of Republicans who say they feel extremely interested in the elections is up by two points in Arizona, nine points in Indiana, eight points in Missouri and North Dakota and up 11 points in Tennessee,” Turner said. 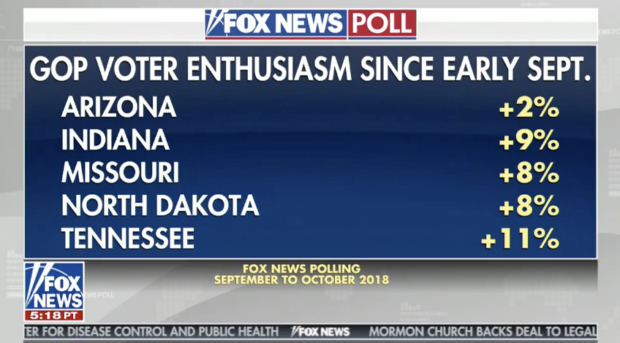 In North Dakota, Democratic Senator Heidi Heitkamp is facing an uphill battle in her reelection race. She is currently down 12 points to her Republican challenger Kevin Cramer, according to The Hill.

Similarly, Missouri Dem. Senator Claire McCaskill is now in a tie with her challenger Josh Hawley despite being up in the polls at the beginning of September.

“The National Republican Congressional Committee tells Fox News Republicans are voting with their dollars, too,” Turner continued. “They say from August to September their donations are up 175 percent with the average individual gift up by 111 percent. No one can say for sure Tucker that all of this hype’s due exclusively to Kavanaugh, but all signs point to yes.”