Brett Kavanaugh was sworn in as the 102nd associate justice of the U.S. Supreme Court in a private ceremony Saturday night.

The Senate confirmed Kavanaugh Saturday afternoon on a narrow 50-48 vote.

“Chief Justice John G. Roberts, Jr., will administer the constitutional oath and retired Justice Anthony M. Kennedy will administer the judicial oath in a private ceremony later today in the justices conference room at the Supreme Court,” Supreme Court spokeswoman Kathy Arberg said in a statement. “Both oaths will be administered so that he can begin to participate in the work of the Court immediately.”

Kavanaugh clerked on the high court for Kennedy during the Supreme Court’s 1993 term with his new colleague, Justice Neil Gorsuch. (RELATED: Kavanaugh Has The Votes: Key Senators Back Embattled Nominee)

A White House spokesman confirmed that President Donald Trump will sign Kavanaugh’s commission aboard Air Force One Saturday afternoon. Trump will appear in Kansas late Saturday at a rally for Kris Kobach, the GOP’s nominee for governor. 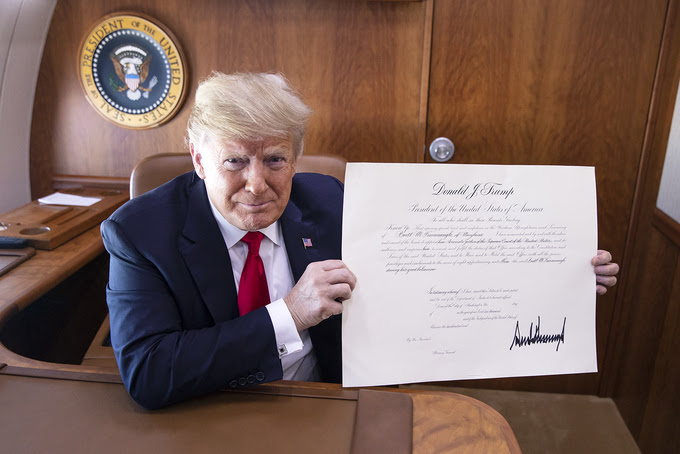 “The White House applauds the Senate for confirming President Trump’s nominee Judge Brett Kavanaugh to the Supreme Court,” White House deputy press secretary Raj Shah said. “Later today, the president will sign his commission of appointment and he will be officially sworn in.”

Passions attending the nomination did not abate with the final confirmation vote. Hundreds of demonstrators gathered in the Court’s marble plaza, chanting slogans, giving speeches, and brandishing picket signs.

Democratic lawmakers and mainline liberal groups followed with protests of their own, warning that Kavanaugh’s confirmation will compromise the Court’s legitimacy.

A second public investiture ceremony is expected to follow in the coming weeks.