LYING ON MY GRAY SOFA IN D.C.— The theme of CNN’s “Reliable Sources” on Sunday was this: If looks could kill.

Three panelists dominated the show: American Urban Radio‘s White House reporter April Ryan, who has long been relentlessly at odds with President Trump‘s White House, Playboy‘s White House correspondent Brian Karem, ditto, and New York Mag‘s Olivia Nuzzi, who tends to march to her own drummer. You never quite know when she’s going to lash out. And Sunday was one of those days when Nuzzi was glaring her ass off at Karem.

In some instances, she winced at his words. April, meanwhile, rolled and angrily squinted her eyes and pursed her lips at Nuzzi, challenging the white blonde to disagree with her take on how the White House treats women and minorities.

April is first up on deck.

“Yes, the reason why is this White House feels that they can go after what they consider weak, what they con-si-der weak,” she explained, annunciating the word. “You don’t see this kind of exchange happening with white males in that room as much as you do with minorities, African American women like myself and other women.”

Aside from April and fired White House aide, Omarosa, who are bitter enemies, it’s hard to know who exactly April is referring to when she insists that Trump and his White House are harder on people of color than any other group of journalists.

CNN’s Don Lemon? Trump has questioned his intelligence. Back in August, Trump wrote on Twitter, “LeBron James was just interviewed by the dumbest man on television, Don Lemon. He made LeBron look smart, which isn’t easy to do.”

Night after night, Lemon has returned the favor with his outright disgust for the president. He routinely calls the president a racist and says the president “traffics in racism.” I don’t blame Lemon for disliking Trump, by the way. How could he not?

But the sheer number of reporters and people whom Trump has insulted is voluminous and spreads across gender, racial and ethnic lines.

“I was there at that press conference with Cecilia Vega,” Karem said, referring to the ABC reporter who Trump demeaned last week as someone who never thinks. “I want to try and walk through it logically. First of all, he’s been at war with the press since day one. Men, women, whatever. …In that press conference, he told me to sit down and I was already sitting down. …He told [NBC’s] Peter Alexander to be quiet. He wouldn’t even let [CBS’s] Major Garrett ask a question. …All that being said, you cannot excuse misogyny by claiming that you’re a misanthrope. You can’t say you hate everybody but it’s okay if you treat women differently.”

Nuzzi listened, at times closing her eyes in irritation.

“But the optics are worse toward women,” April declared.

Nuzzi insisted the media contributes to the notion that female reporters have it worse.

“When I see headlines that say, ‘the president speaks rudely to female reporters,’ I think that that is sexist in itself,” Nuzzi said. “Cecilia Vega, Kaitlan Collins — they are not female reporters, they are reporters who happen to be female.”

“They were asking credible questions that the president, I  don’t believe, answered,” she continued. “We should be judging them as reporters first. When we talk about their gender as though it is the most important thing about that exchange, I think we contribute to exactly the thing that we are decrying here. I think the president has been rude to reporters of every gender.”

Nuzzi agreed with April that Trump’s White House treats non-white reporters differently, but charged that saying “females” is too “simplistic.” She says the larger issue is that Trump is anti-first amendment and anti-freedom of the press. 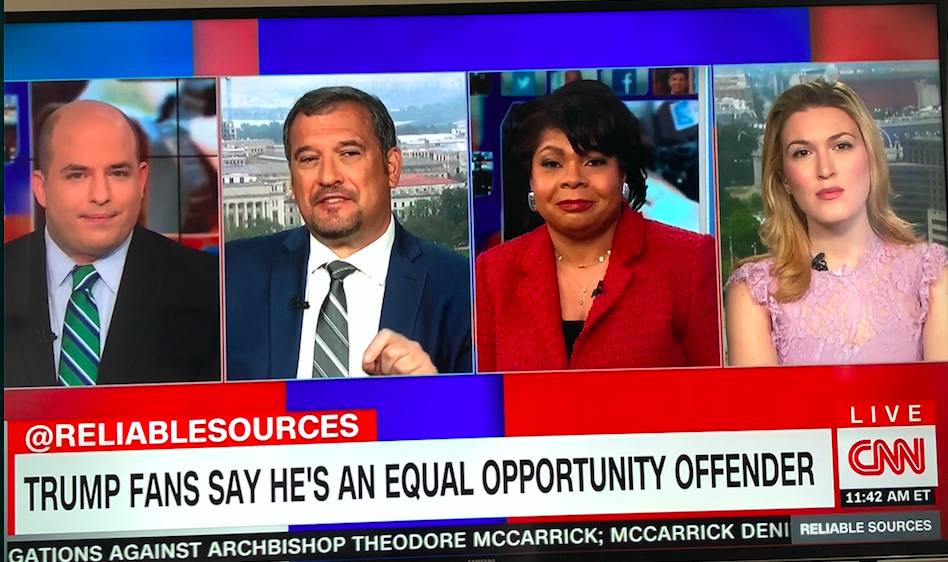 And with that, the show came to a thunderous halt. April and Karem took a sharp turn and made the entire discussion about themselves.

April bragged about a conversation she had with former White House Chief Strategist Steve Bannon in his home last week. (Brag, brag, brag.) The conversation lasted two whole hours. (Brag, brag, brag.) “We talked about the fact that I am not part of the resistance, but he said because of my race and my gender I cannot go to a Trump rally in a red state because I am perceived as the enemy.”

“BANNON SAID THAT,” she replied.

Let’s pause for a brief intermission: SINCE WHEN DID BANNON BECOME GOD? And why is now playing the role of therapist to offended Washington journalists? Also: I will resume making fun of the show’s host next week, but for now this discussion is too important to ignore.

Karem was feeling left out.

“What it really is, is they don’t like ME at those rallies,” he whined, not wanting April to hog the ‘Trump hates me most’ spotlight. “I went to a West Virginia rally where they came at me and said ‘fake media fake media.’ …The reality is your perception cannot drive your coverage. We have to be there no matter whether we are black, white, brown, male female. We are going to be there.” 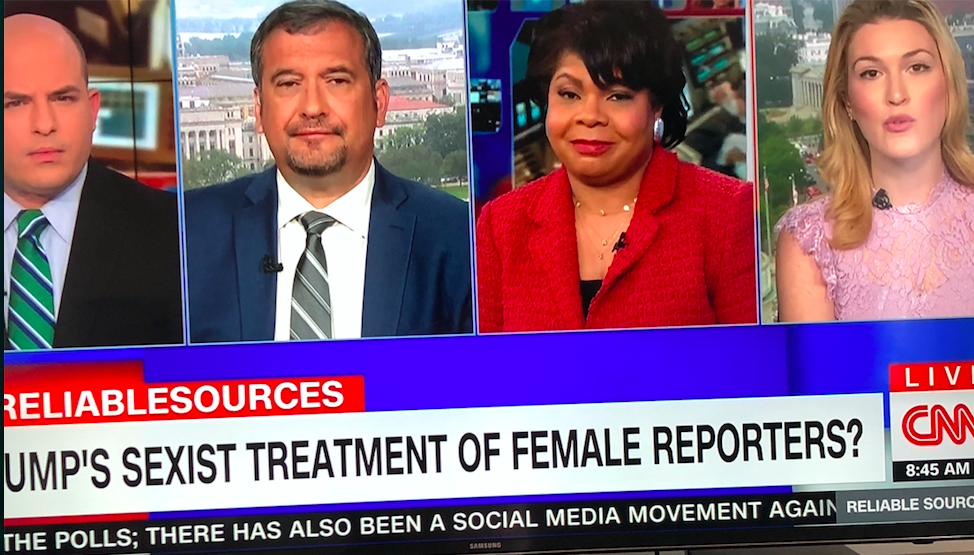 “Black woman. Let’s try black woman,” April snapped, interrupting her, reminding her that she was “still a woman.” Hilarious. Did anyone forget that she is a woman?

This is when Karem (a man) brought up his Lebanese ethnicity. “I walk into a rally and they ask me what my last name is and if I’m a Muslim,” he said.

This is genuinely awful. But in Trump’s existence, this is his base. And he’ll do whatever he needs to keep them sufficiently riled.

To give this all some context, CNN’s Kaitlan Collins has become one of the White House’s least favorite reporters. She’s white and has a delicate southern twang. At one point the White House Communications office banned her from attending events because they found her questions too mean. Thankfully it was short-lived. The White House looked incredibly weak for instituting such a move.

So last week in the Rose Garden, Trump swatted her like a bee when she pointedly asked tough questions about his then-Supreme Court nominee Brett Kavanaugh, who had been accused of sexually assaulting a woman in high school 35 years ago.

Collins, a former coworker at The Daily Caller, doesn’t suffer fools gladly. As Trump treated her like a child — “Yeah, don’t do that, don’t do that. Don’t do that, that’s not nice…excuse me, don’t do that, ” he spat at her like she was a little girl in need of manners — she didn’t care. Ultimately Trump ordered her to hand the microphone to another reporter. It was a pleasure to watch her unflinching, unemotional reaction. As Trump’s tenor of anger rose, she kept right on pushing — and it totally pissed him off. You could practically hear her cheering squad for not reacting to his bullshit.

Likewise, the aforementioned Vega also asked Trump about Kavanaugh — and for that, he demeaned her. It was awful to watch as she looked around and didn’t realize he had called on her. Trump mocked her, saying, “She’s shocked that I picked her,” he said, presumably to amuse the group of mostly men behind him. Son-in-law/aide Jared Kushner was among those who smiled at the president’s snide joke.

She replied, “I’m not, thank you Mr. President.” As he watched her confusion, he seemed to have a certain glee as he delivered a typical but nonetheless horrible Trumpian zinger: “That’s OK. I know you weren’t thinking. You never do.”

If he had said it to CNN’s Jim Acosta would anyone have cared? White House Press Secretary Sarah Sanders regularly castrates him, saying things like, “I know it’s hard for you to understand even short sentences.” That was in June. Or, more recently, “I’m finished with you.”

The moment with Vega felt like someone dropped a large brick on a glass coffee table.

Trump gratuitously insults male and female reporters at a dizzying clip that has become the norm. But somehow it feels worse when he goes after females.

In June of 2017, Trump went after MSNBC’s Mika Brzezinski (white), saying she was “bleeding badly from a face-lift” at a gathering that she and fiancé Joe Scarborough (also white) attended at Mar-a-Lago on New Year’s Eve. He called her “low I.Q.” and disparaged Scarborough as a “psycho.” Viewers felt sorry for her and she had to go on TV and tell everyone she was OK.

MSNBC’s Katy Tur (also white) wrote an entire book on the terrible treatment she endured on Trump’s campaign trail that sometimes left her feeling afraid at his rallies. It’s called Unbelievable: My Front-Row Seat to the Craziest Campaign In American History.

Sometimes Trump’s little hand grenades at the media feel distinctly similar to his first debate in Cleveland when then-Fox News reporter Megyn Kelly asked Trump about his abhorrent treatment of women, calling them “pigs” and such. In perfect Trump timing, he raised a pointer finger and replied, “ONLY ROSIE O’DONNELL.” The moment felt shocking and comical while the instances with Collins and Vega felt jagged, rude and nasty.

Trump sticks it to female reporters in a way that somehow feels more cringeworthy than when he does it to male journalists. It’s unconscious and societal. Men are supposed to be tough and let the insults bounce off their rough skin. It’s easier to watch, for example, when Trump cracks on CNN’s Acosta, who begs the White House to tangle with him.

For reporters like April and Karem, fighting with Trump has become their “brand.”

Aside from most reporters at Fox News and some conservative outlets, Trump treats reporters like dirt under his shoe. It’s his shtick. The more reporters complain, the more it ignites his base. Perhaps it feels worse now because the angrier he gets, the more vicious his insults become. And the more seriously journalists are threatened in this world, what once seemed funny and brash is definitively less so.

As for the issue of race, April Ryan can win a prize if she wants one, but after watching the slew of journalists Trump has insulted in person and in tweets, she doesn’t deserve a ‘Trump treats me worst’ award just because she’s a woman of color who spent a few hours in King Bannon’s home.