The United Nations’ call for governments and companies to shift trillions of dollars into “low-carbon energy” systems to limit future global warming is “not feasible,” according to an environmental economist.

A new Intergovernmental Panel on Climate Change (IPCC) special report projects between $1.6 trillion and $3.8 trillion in “energy system supply-side investments” is needed every year through 2050 to have any chance of keeping future global warming below 1.5 degrees Celsius.

That’s a price tag of between $51.2 trillion and $122 trillion by 2050 just for energy investments. Environmental economist Richard Tol said, given the high cost, the IPCC’s report is totally unrealistic.

“No, 1.5 degrees Celsius is not feasible,” Tol, an economics professor at the University of Sussex, told The Daily Caller News Foundation via email. (RELATED: Here’s What The Media Won’t Tell You About The UN’s New Climate Report)

The IPCC’s 1.5 degree scenario, a stretch goal of the Paris climate accord, calls for emissions cuts of 45 percent below 2010 levels by 2030, and then for emissions to reach zero by 2050.

In other words, the world would have to build the equivalent of one to two nuclear power plants every day to meet this goal, according to University of Colorado professor Roger Pielke, Jr. Countries would also have to shutter thousands of coal, gas and oil-fired power plants as well. 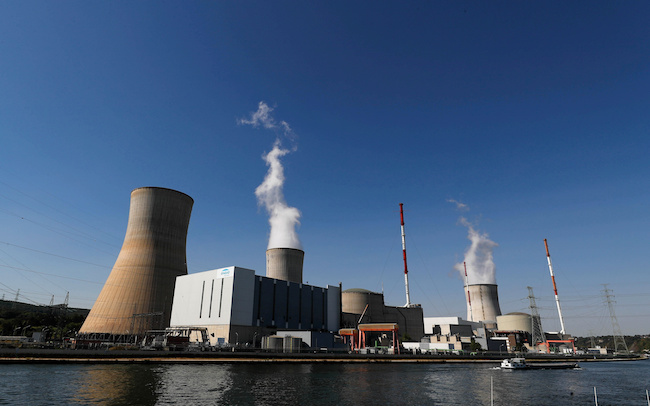 Steam escapes from the cooling tower of the Tihange nuclear power station, one of the two large-scale nuclear power plants in Belgium, August 7, 2018. REUTERS/Yves Herman

The cost of doing this is high. The IPCC’s models said investments in “resource extraction, power generation, fuel conversion, pipelines/transmission, and energy storage” would need to reach “levels of between 1.6–3.8 trillion [U.S. dollars per year] globally on average over the 2016-2050 timeframe.”

However, the report’s price tag for allowing global warming to hit 1.5 degrees Celsius by 2040 is $54 trillion, which is at the lower end of the IPCC’s estimates of how much it would cost to avoid such warming.

If costs are on the high end, they would outweigh the benefits more than two-to-one. That’s not a realistic plan to fight warming, Tol said.

“China and India have many brand new coal-fired power plants, and someone will need to buy out the owners to close them down decades before the end of their economic life,” Tol said. “That alone will breach the target.”

What’s more is the IPCC pathways to staying within the 1.5-degree limit all assume the use of “carbon dioxide removal” — which is code for planting trees or inventing technology to literally suck greenhouse gases out of the air.

However, reforestation and technological deployment on such a scale would require subsidies on par with national military or healthcare spending, Tol noted.

“Model pathways that limit global warming to 1.5°C with no or limited overshoot project the conversion of 0.5–8 million km2 of pasture and 0–5 million km2 of non-pasture agricultural land for food and feed crops into 1–7 million km2 for energy crops and a 1 million km2 reduction to 10 million km2 increase in forests by 2050 relative to 2010”

“Negative emissions are another problem,” Tol said. “This would require subsidies on a massive scale. Any politician proposing that would be voted out of office.”

Even the IPCC’s report notes the amount of land that would need to be dedicated the reforestation and bioenergy crops “may have significant impacts on agricultural and food systems,” endangering progress on eliminating world hunger.

However, there is a chance the world won’t warm nearly as much as the IPCC predicts, according to scientists. Why? Because the IPCC’s models may overestimate how sensitive the atmosphere is to increases in greenhouse gases.

“There is a chance that the world could come pretty close to the target by 2100, if in fact the climate model sensitivity has been overestimated by close to a factor of two,” Cato Institute climate scientist Patrick Michaels told TheDCNF.

“This is approximately the result in the recent work Nic Lewis and Judy Curry, and John Christy and Dick McNider,” Michaels said.

Climate scientist Judith Curry co-authored a study published in April that found the IPCC models likely overestimated warming by 30 to 45 percent. In a recent blog post, Curry said the UN’s new report used “climate models that are running too hot and not fit for purpose of projecting 21st century climate change.”

“[T]he IPCC still has not made a strong case for this massive investment to prevent 1.5C warming,” Curry wrote in her blog.