Tucker Carlson has his finger on the pulse of the American people. What other explanation can there be for the Fox News host’s wild ratings in the 8 pm slot–nearly 3 million nightly viewers, far outpacing his competition at that hour.

But what is it really that Tucker Carlson gets about America that other prominent figures in media seemingly don’t? The answer to that question resides in Tucker’s new book, “Ship of Fools.” The book draws its title from an allegory in Plato’s “Republic,” in which a ship is captained and crewed by so-called “professionals” who actually have no idea what they are doing. Sound familiar? Tucker’s book makes a convincing case that this is an apt comparison for the professional elites who have taken to steering the metaphorical ship known as America.

“Ship of Fools” explores several instances of the utter cluelessness of this country’s ruling class. It is at its strongest when it provides accounts of how the Democratic Party abandoned former bulwarks of its platform, usually at the behest of wealthy or corporate interests. A political party that used to count Ralph Nader (and his pro-consumer outlook), Cesar Chavez (and his anti-illegal immigration stance) and Jimmy Carter (and his antiwar policies) among its heroes, now, based off all the evidence, can only be considered pro-monopoly, pro-amnesty and pro-war.

At some point in recent American history, Tucker demonstrates in his famously clever prose, there was a convergence in elite opinions. The people in charge of this country stopped caring about the people they are supposed to represent–or perhaps they just stopped pretending to care. Either way, the election of Donald Trump was a stark warning to those steering the “ship of fools.” And, given common accounts as to why he won (Russian hacking, secret racism/sexism of American voters, etc.), Tucker is not so sure that they’ve gotten the memo. Reading “Ship of Fools” might be their last best hope to right the ship before something truly calamitous happens to this country. 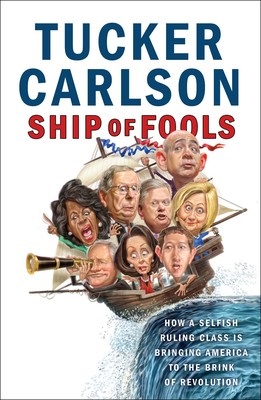 “Ship of Fools: How a Selfish Ruling Class Is Bringing America to the Brink of Revolution” — $16.80 Hardcover