Senatorial nominee Rep. Robert “Beto” O’Rourke has for years been a recurring guest on the “Drug Truth Network,” a fringe pro-drug legalization media outlet whose founder has compared America to Nazi Germany and law enforcement and military members to terrorists.

The founder of Drug Truth Network, Dean Becker, is a pro-drug legalization activist. O’Rourke has been a recurring guest since 2009, when the Texas Democrat sat on the El Paso Council, according to Becker’s website, DrugTruth.Net.

Becker has three weekly radio shows: “Century of Lies,” “Cultural Baggage” and “4:20 Drug War News.” He’s featured O’Rourke on all three of them.

O’Rourke appeared on “Cultural Baggage” in August, where Becker introduced him as “my very good friend Congressman Beto O’Rourke.”

O’Rourke praised Becker and expressed his gratitude for the host’s work.

“I am grateful for the chance to be able to talk with you, and as always, you’re asking the questions about the most important issues,” the congressman said. “I’m just very grateful to, almost ten years in, being able to continue the conversation with you.”

While O’Rourke is a rising star within the Democratic Party — even floated as a 2020 presidential candidate — Becker is on the political fringe.

Becker regularly refers to the American military’s “War on Terror” as a “war of terror,” “because certainly there’s terror on both sides of this,” he explained in a 2008 episode.

A video Becker published in March 2017 shows the American flag with a Nazi emblem and compares federal law enforcement to the terrorist group ISIS.

“USA: now fighting two eternal wars. The war on drugs and the war of terror,” Becker said in the video, as images of President Donald Trump, federal law enforcement officers and Nazi depictions flash across the screen.

O’Rourke has boosted Becker’s profile beyond appearing on his radio shows.

The congressman sponsored a Capitol Hill press conference in March 2014 promoting Becker’s book “To End The War On Drugs.”

O’Rourke credited Becker as one of the people who helped change his opinion on drug legalization and said he was “grateful” for Becker’s work in the “trenches” on the subject.

Becker has posted a number of photos on his Facebook page showing him with O’Rourke at different events. 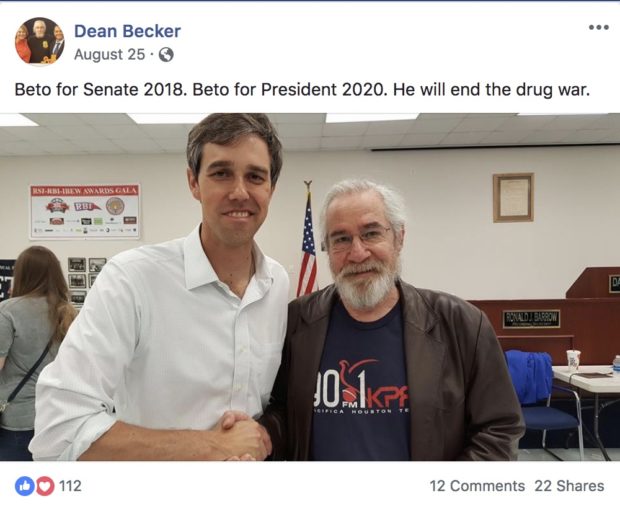 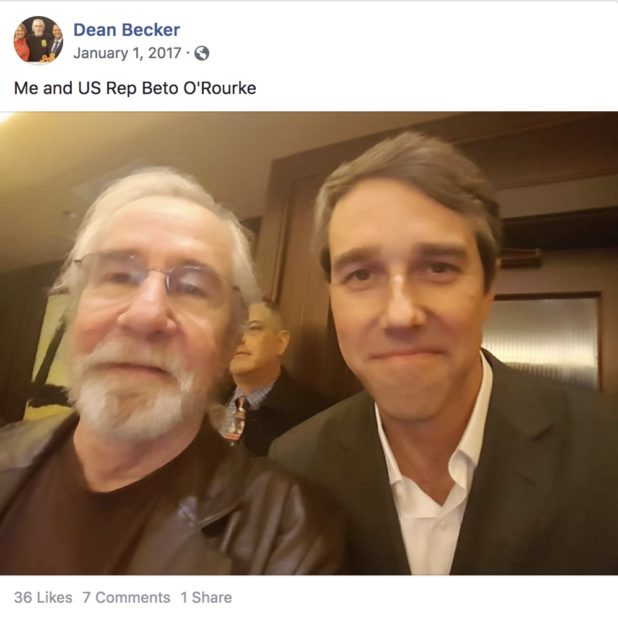 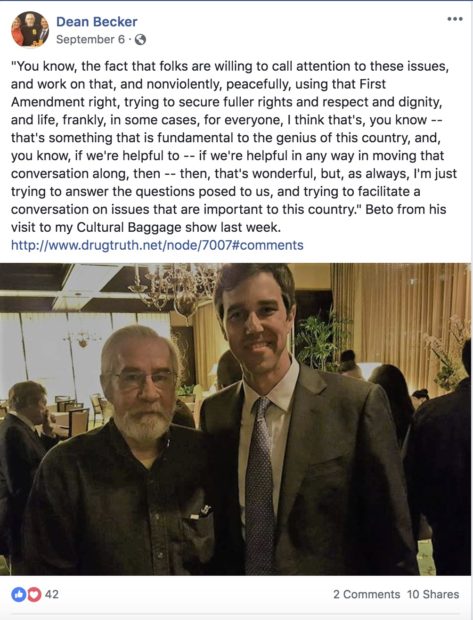 He posted a video in February 2016 saying that “the top leaders around the world, especially in the U.S., the proponents of the drug war, adamantly refuse to be a guest on my radio program.”

The radio host’s vision for total legalization is “cocaine and heroin for sale [at] $1 a gram,” he explained in a July Facebook post.

Becker confirmed in a phone call with The Daily Caller News Foundation that he and O’Rourke have known each other since 2009 but declined to provide further comment.

The O’Rourke campaign did not return TheDCNF’s request for comment.