Hurricane Michael hadn’t even run its course before some scientists and pundits suggested to no longer refer to cyclones as natural disasters because of man-made global warming.

“I prefer ‘unnatural disaster’ when talking about impacts that have been exacerbated by climate change,” Penn State University climate scientist Michael Mann told CNN’s John Sutter, who posed the question over Twitter on Wednesday.

“I call them ‘what used to be entirely natural disasters’ … and if I have another 5s, I add: ‘now amplified or exacerbated by human-induced change,'” echoed Texas Tech University climate scientist Katharine Hayhoe.

Seemingly without any prompting, astrophysicist Neil deGrasse Tyson warned that “as climate-change continues, and coastal flooding from hurricanes worsens, [insurance forms] might now include ‘Acts of Humans.'”

Earthquakes, tsunamis, tornadoes — traditionally “Acts of God” on Insurance Forms. But as climate-change continues, and coastal flooding from hurricanes worsens, the Forms might now include “Acts of Humans”.

“The important thing, experts said, is that we humans accept some blame,” Sutter concluded in an article published by CNN on Thursday.

Sutter put Michael’s arrival in the context of a United Nations report released Sunday that warned of catastrophic warming if nothing is done in the next decade or so to cut greenhouse gas emissions.

However, claims that hurricanes are no longer “natural” disasters do not line up with the IPCC’s latest report. (RELATED: Here Are All The ‘Last Chances’ We’ve Had On Climate Change)

The IPCC’s report echoed what the international body found in its 2013 report, called AR5 — there’s little to no evidence global warming is making hurricanes more extreme or intense.

“Numerous studies towards and beyond AR5 have reported a decreasing trend in the global number of tropical cyclones and/or the globally accumulated cyclonic energy,” the IPCC’s latest report found.

While other studies have found increasing trends in some basins and claimed to link them to global warming, the IPCC noted that “[s]uch contradictions” and the lack of long-term data in many areas “implies that there is only low confidence regarding changes in global tropical cyclone numbers under global warming over the last four decades.”

Indeed, the IPCC’s findings echo those of the National Oceanic and Atmospheric Administration (NOAA) that it’s “premature to conclude that human activities–and particularly greenhouse gas emissions that cause global warming – have already had a detectable impact on Atlantic hurricane or global tropical cyclone activity.”

The IPCC projects that tropical cyclone numbers will decrease overall in a warmer world, but intense hurricanes — Category 4 and 5 storms — will become more frequent relative to today. However, this signal could take decades to appear in the data. There’s no apparent trend in storm intensity, according to data compiled by meteorologist Ryan Maue. 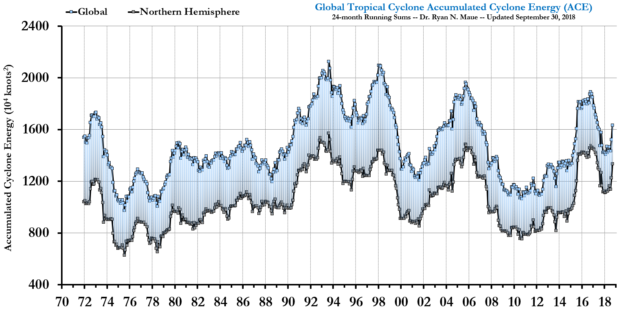 It’s by no means a sin to disagree with the IPCC or NOAA, but many of the scientists and journalists challenging establishment science on hurricanes regularly invoke the 97 percent “consensus” on warming to silence debate.

“It is time to end the fake debate about whether or not climate change is real, human-caused, and a threat, and get on to the worthy debate about what to do about it,” Mann said in a 2016 article on climate “consensus” study.