The Republican National Committee released a new ad on Thursday capitalizing on Democrat politicians calling for confrontations between citizens and conservative leaders with examples of people listening to their pleas.

The ad featured Former Attorney General Eric Holder saying that the new motto of the party is “when they go low, we kick them.” Holder made the comment at a fundraiser earlier this week but then issued a clarifying statement on Thursday.

It also included a clip of Congresswoman Maxine Waters calling for citizens to confront public officials. Waters was one of the first politicians to make such a demand, saying, “If you see anybody from that cabinet in a restaurant, in a department store, at a gasoline station — you get out and you create a crowd. And you push back on them.”  (RELATED: GOP Latest Ad Is A Highlight Reel Of Democrats And Anti – ‘The Left Is Crazytown’) 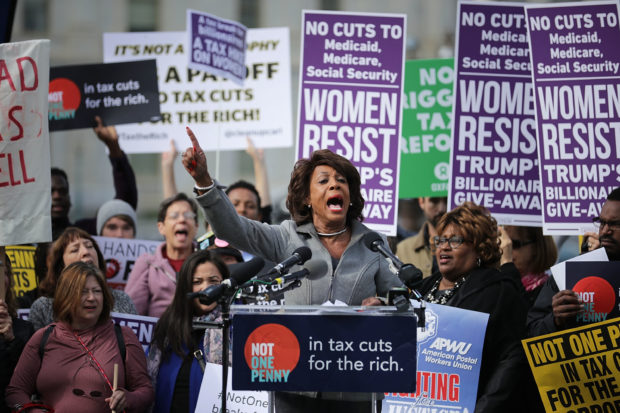 WASHINGTON, DC – NOVEMBER 01: Rep. Maxine Waters (D-CA) addresses a rally against the Republican tax plan outside the U.S. Capitol November 1, 2017 in Washington, DC. The rally was organized by Patriotic Millionaires, left-wing group of weathy people who support political representation for all citizens and believe that the rich should shoulder a greater burden of taxes. (Photo by Chip Somodevilla/Getty Images)

Former Secretary of State Hillary Clinton was also featured, rejecting the calls for “civility,” because Republicans “[want] to destroy what you stand for, what you care about.”

The ad then pivots to show people listening to those calls. It showed protesters confronting Texas Sen. Ted Cruz and his wife Heidi at a restaurant in D.C. It also included videos of protesters banging on the doors of the Supreme Court after Justice Brett Kavanaugh was confirmed. (RELATED: New RNC Ad Takes Aim At Democrats’ ‘Moral Victory’ Spin)

“We know passions are high in this country but when you have leaders for the Democratic Party escalating that, it is going to lead to something dangerous,” said RNC Chair Ronna McDaniel to The Daily Caller. “This is a time where leaders of the Democrat Party need to tamp down these passions.”