House Majority Leader Kevin McCarthy formally introduced Friday a bill that would set aside more than $23 billion to build President Donald Trump’s proposed border wall, drawing attention to a key concern of Republican voters ahead of the November midterm elections.

The proposal, known as the Build the Wall, Enforce the Law Act of 2018, would appropriate $16.6 billion for a “border wall system” along the U.S.-Mexico frontier consisting of physical barriers and intrusion detection systems. It adds another $6.8 billion for security infrastructure, including border surveillance technology and additional detention space for illegal immigrant families.

McCarthy tied the bill’s border security provisions to the ongoing family migration crisis at the southwest border, which the Trump administration says is caused by laws that encourage illegal immigration.

“For decades, America’s inability to secure our borders and stop illegal immigration has encouraged millions to undertake a dangerous journey to come here in violation of our laws and created huge loopholes in the legal channels we use to welcome immigrants to our country,” the California Republican said in a statement. “President Trump’s election was a wakeup call to Washington. The American People want us to build the Wall and enforce the law.” 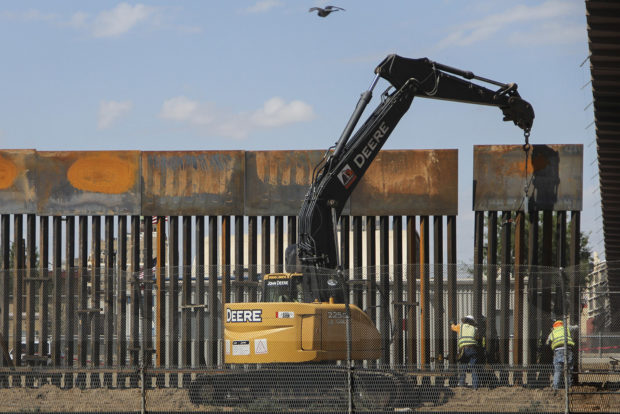 Workers in El Paso Texas, in the U.S., replace a section of the Mexico-U.S. border fence next to the international border bridge “Paso del Norte” as seen from Ciudad Juarez, in Chihuahua state, Mexico, on Sept. 26, 2018. HERIKA MARTINEZ/AFP/Getty Images

Despite Trump’s demands for more wall funding, Congress approved just $1.6 billion for border security projects in the 2018 omnibus spending bill. Part of that sum is for 33 miles of new border fencing that had already been authorized in the 2006 Secure Fence Act. (RELATED: Bollard Wall Project To Begin At US-Mexico Border)

It also includes Kate’s Law, which enhances penalties for illegal immigrants who are caught re-entering the U.S. after having been deported. Kate’s Law passed the House 257-167 in 2017, but later stalled in the Senate.

McCarthy, a leading candidate to become speaker of the House when House Speaker Paul Ryan retires next year, has sought to align himself with Trump’s immigration agenda ahead of the midterm elections. A tough stance on immigration and border security could help him fend off a challenge from the right by GOP Ohio Rep. Jim Jordan, the leader of the conservative House Freedom Caucus.