Sinema once led Republican nominee Martha McSally by as many as eight points, but now is clinging to a lead of just half a point, according to the Real Clear Politics polling average.

Sinema and McSally, who both serve in the House, are running to replace retiring Republican Sen. Jeff Flake. The race is considered one of Democrats’ best chances to flip a Senate seat in November.

Sinema, a former activist with the left-wing Green Party, is under increasing scrutiny over her history of inflammatory positions. 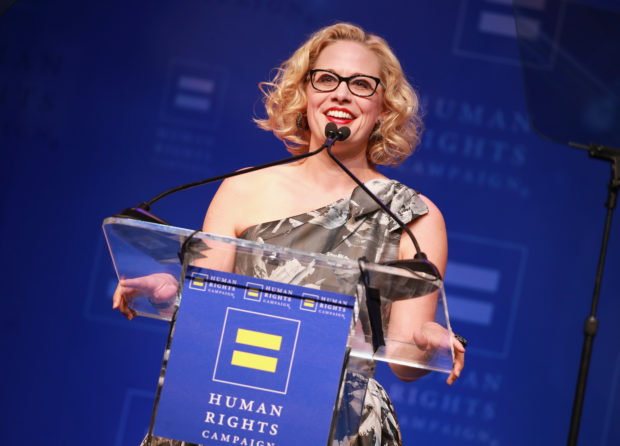 Flyers that Sinema’s anti-war group distributed ahead of a 2003 protest depicted American soldiers as skeletons and said the U.S. was waging “terror” in the Middle East. A local anarchist group joined forces with Sinema’s group for the protest.

The day before the protest, Sinema said she didn’t care if Americans opposed to the war joined the Taliban.

“I don’t care if you want to do that, go ahead,” she said. (RELATED: Kyrsten Sinema: ‘I Don’t Care’ If Americans Want To Join The Taliban)

Sinema drew comparisons in 2006 between American soldiers killed abroad and people who died trying to illegally cross the border into the U.S.

While serving the state legislature in 2007, Sinema fought to protect a loophole that allowed men caught with child prostitutes to argue that the child looked older as a defense in court.

Sinema argued that eliminating the loophole was “not fair,” citing her past work with 12- and 13-year-old children who she said “look older than me.”

Republicans have also drawn attention to statements Sinema made that disparaged the state she now hopes to represent in the Senate.

Sinema called Arizona the “meth-lab of democracy” in 2001. Another video from the same year showed her saying that the state produces “crazy.”

The Sinema campaign did not return an email seeking comment.

“No one is forcing Kyrsten Sinema to run in a state that she thinks is ‘crazy’ and a ‘meth lab of democracy,'” Republican National Committee spokeswoman Renae Eze said in a statement to The Daily Caller News Foundation.

“Sinema’s perpetual disdain for Arizona proves what little respect she has for the people who live here,” Eze continued. “Kyrsten Sinema is more than welcome to drop out so Arizonans can be represented by a leader who actually cares about this state.”