Sanctuary city Minneapolis is encouraging illegal immigrants to know their rights by putting placards in all of its police cars. As NBC News report, the “Know-Your-ICE-Rights” signs are the brainchild of Minneapolis Mayor Jacob Frey, who announced his plan Wednesday. 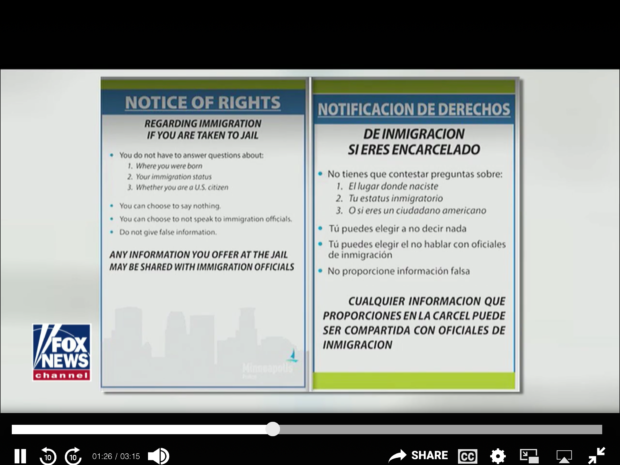 The signs that the mayor of Minneapolis has ordered placed in every city police car. Fox News screenshot, Oct. 12, 2018

“Right now, cities have to step up and do what our federal administration and Congress won’t,” he said. “We will not let this lack of compassion at the highest levels of our government prevent us from doing what is right for our immigrant communities here in Minneapolis.” (ACLU Asks Illegal Immigrants To Inform Against ICE If Questioned During Hurricane Evacuation)

A suspected smuggler uses his arms to paddle a raft of immigrants across the Rio Grande in an illegal crossing of the Mexico-U.S. border near McAllen, Texas, U.S., May 9, 2018. REUTERS/Loren Elliott

He called the mayor’s placards an example of “the extreme left-wing politics here in Minneapolis” that he says represents “a rebellion going on … it’s a direct hit against President Trump’s policies.”

Frey said the signs “will make it clear that you don’t have to answer questions about where you were born, your immigration status, whether you are a citizen and that you have the right to remain silent.”

Illegals are also told that they don’t have to talk to Immigration and Customs Enforcement (ICE) agents and to beware of saying too much to police because “any information you offer at the jail may be shared with immigration officials.”