Christopher Scalia, son of late Supreme Court Justice Antonin Scalia, said his father would not have been surprised by the drama surrounding Justice Brett Kavanaugh’s confirmation.

“Would he have been surprised by the heated debate, political maneuvers, protests, last-minute delays and uncorroborated allegations of sexual misconduct that we saw during now-Justice Kavanaugh’s confirmation process?” Christopher wrote in an op-ed for Fox News Thursday.

“I don’t think he would have been shocked by the no-holds-barred fight over a Supreme Court vacancy, either,” Christopher continued. “He long ago warned Americans about the excessive intrusion of politics into the judicial appointment process. And he explained that a large share of the blame belongs to the justices themselves.”

Christine Blasey Ford accused Kavanaugh of sexual assault before his confirmation. Ford accused him of assaulting her at a party back in high school and claimed he tried to rape her. He denied any wrongdoing and was confirmed in the Senate by a final tally of 50-48.

Christopher claimed his father had already sounded the alarm about the politicization of the high court before his death and said the SCOTUS justices are partly to blame. (RELATED: Judge Cites Justice Scalia To Uphold Gun Control Law) 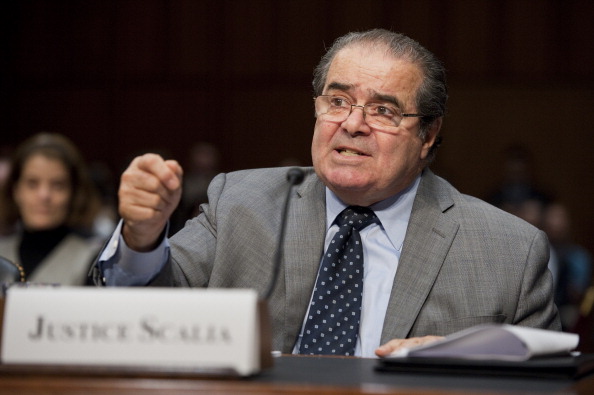 Scalia was known as a strict constitutionalist and believed in interpreting the law instead of making it. He also believed in weighing the original intent of the founders when the court was asked to rule on a major constitutional issue.

Scalia was also quoted saying, “No court can expect to remain immune from severe political pressure … if it assumes the role of inventing solutions for social problems instead of merely applying those solutions prescribed in democratically adopted statutory or constitutional text.”

Christopher argued the best way to limit the drama of judicial confirmations is to have current judges return to their roles as arbiters and interpreters, rather than have them legislate from the bench.

“One way to help make our judicial confirmation battles less polarizing, then, would be for judges to return to the more limited role they had held for most of our nation’s history: applying laws and statutes according to their text and interpreting the Constitution according to its original public meaning, using history, tradition and precedent as guides,” he wrote.

“If federal judges returned to the more modest approach our Founding Fathers envisioned for them, they would be less likely to rule according to their preferred policy preferences and more likely to leave political decisions to our elected representatives.”

“My father devoted considerable time to delivering speeches across the country and around the world explaining the advantages of originalism and textualism,” Christopher concluded. “He knew that persuading people to this way of thinking would help return the judicial branch to its proper status as what Hamilton famously called ‘the least dangerous branch’ and help subdue the intensity of the nomination process.”