Occultists in Brooklyn are inviting practitioners of witchcraft to place a hex on Supreme Court Justice Brett Kavanaugh and the patriarchy.

Catland, an establishment that describes itself as “Brooklyn’s premiere occult bookshop & spiritual community space,” recently issued an invitation on Facebook which read, “Please join us for a public hex on Brett Kavanaugh, upon all rapists and the patriarchy at large which emboldens, rewards and protects them.” 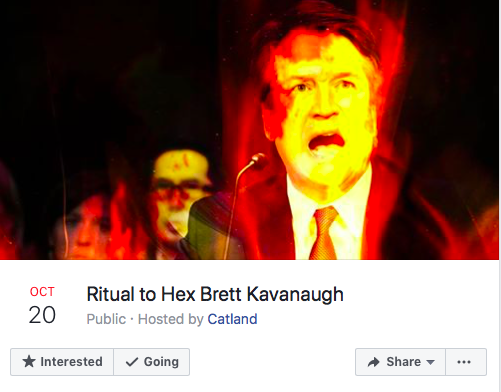 “We are embracing witchcraft’s true roots as the magik [sic] of the poor, the downtrodden and disenfranchised and it’s [sic] history as often the only weapon, the only means of exacting justice available to those of us who have been wronged by men just like him,” the statement, noticed by CNS News, continued. (RELATED: Anti-Trump Witch Compares Casting Hexes To Singing The National Anthem, Saluting The Flag)

“He will be the focal point, but by no means the only target, so bring your rage and and [sic] all of the axes you’ve got to grind. There will also be a second ritual afterward – ‘The Rites of the Scorned One’ which seeks to validate, affirm, uphold and support those of us who have been wronged and who refuse to be silent any longer.”

Though it claims that “no one will be turned away for lack of funds,” Catland is suggesting a $10 donation to participate in the event. Fifty percent of the proceeds will be donated to charity, split equally between Planned Parenthood and the Ali Forney Center, which provides housing for LGBT youth. As of the writing of this article, over 10,700 respondents have shown interest on Facebook, and the event claims to be “sold out.”

The group hex is the latest attempt by some to magically “bind” President Donald Trump and his administration. Shortly after the 2017 presidential inauguration, the content of the ritual purportedly used by members of the “#MagicResistance” was published online, according to the BBC. Its author, a self-described “magical thinker” named Michael M. Hughes, recently published a book called “Magic for the Resistance: Rituals and Spells for Change”.

It’s finally here! MAGIC FOR THE RESISTANCE: RITUALS AND SPELLS FOR CHANGE is on store shelves and shipping from online retailers. Ask for it at your local bookseller or order online: https://t.co/JjnB5ENBig#BindTrump#MagicResistance#WitchHunt#M4TR pic.twitter.com/cU503saxYv

Look at this picture of Donald Trump burning in hell from Saturday night’s #BindTrump ritual.

See? Told ya you’d feel better! Pass it on! pic.twitter.com/gE7Klhqxvi