So is beer on the decline? Probably not very much. That’s because the study’s headline-grabbing results rely on a global warming projection that’s increasingly been called into question by experts.

The study, published in the journal Nature Plants on Monday, found that global barley production could drop as much as 17 percent on average under a “business as usual” scenario. That would “result in dramatic regional decreases in beer consumption and increases in beer prices,” the study found.

“Although not the most concerning impact of future climate change, climate-related weather extremes may threaten the availability and economic accessibility of beer,” the study’s authors wrote.

Barley is the main ingredient in beer, and projected increases in “extreme drought and heat” could hurt barley production. Many media outlets ran with the study’s alarming findings. (RELATED: Trump Burns Down ’60 Minutes’ Host’s Straw Man Argument On Global Warming)

“It kind of adds insult to injury. There’s a heat wave, so you want a beer. But it costs more,” co-author Nathan Mueller, a University of California-Irvine researcher, told BuzzFeed News’s “The Latest Victims Of Climate Change: Beer Drinkers.” “It hits close to home for people.”

“Climate change mitigation is the only way. Everybody in the world needs to fight,” co-author Dabo Guan of Tsinghua University in Beijing told The New York Times in “Heat and Drought Could Threaten World Beer Supply.” 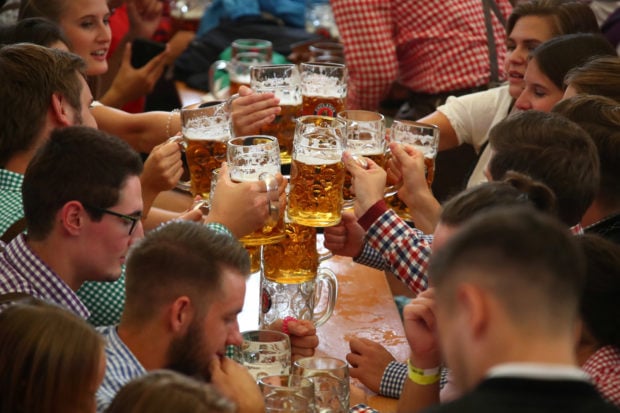 Visitors toast with beers during the opening day of the 185th Oktoberfest in Munich, Germany September 22, 2018. REUTERS/Michael Dalder – RC1DF7640A30

However, the study’s headline findings of a nearly 20-percent drop in barley production is based on a scenario of global warming that’s been deemed “exceptionally unlikely” by experts in the field.

Two University of British Columbia scientists published a study in 2017 calling into question use of the “business as usual” scenario, called RCP 8.5, for global warming predictions. RCP8.5 was used in the United Nations’ 2013 climate assessment.

Use of RCP8.5 yields a nearly 5-degree-Celsius rise in global average temperature by 2100, which Mueller’s study says could, on average, reduce barley production 20 percent and raise beer prices.

It’s basically the same scenario scientists used in a July study warning of a “hothouse Earth” from unabated global warming. The goal of the study, however, was to inspire action against global warming through “fundamental societal changes” to create a “stabilized Earth” at below 2 degrees Celsius, according to a press release.

Despite its problems, RCP8.5 is commonly used by scientists looking at potential impacts of catastrophic global warming. And of course, with catastrophic findings comes media headlines.

Media outlets are less interested in studies that analyze low-end or mid-range climate scenarios. Would TheNYT and others have covered the study if it highlighted its low-end results of a 4-percent decrease in barley production?

Probably not. Barley production can be highly variable depending on prices and local weather patterns, so a 4-percent hit would likely be masked in annual production variability driven by economics or other factors.