North and South Korea agreed Monday to move forward with plans to connect roads and railways that have been divided since the Korean War, the latest step in a warming of bilateral relations Washington has eyed with suspicion.

After talks at the border village of Panmunjom, officials said both governments would hold a groundbreaking ceremony on the project in the coming months, likely in late November or early December.

The announcement follows a series of summits between South Korean President Moon Jae In and North Korean leader Kim Jong Un, during which both men agreed to work toward reducing conventional military threats on the Korean peninsula.

“The South and North reached the agreement after sincerely discussing action plans to develop inter-Korean relations to a new, higher stage,” the two governments said in a joint statement released by South Korea’s Unification Ministry.

Monday’s meeting comes as the Trump administration is engaged in parallel talks with the Kim regime over North Korea’s nuclear weapons program. Washington’s “maximum pressure” campaign calls for the maintenance of international sanctions on Pyongyang until it demonstrates the complete and verifiable dismantling of its nuclear arsenal.

That strategy is at odds with what Moon and South Korean negotiators have been pushing in meetings with their North Korean counterparts. Seoul prefers a gradual reconciliation between Washington and Pyongyang, with each side making concessions in a series of steps that eventually lead to denuclearization.

“Once North Korea reaches a certain stage in the denuclearization process, from that point on, gradual relief of economic sanctions on North Korea should also be seriously considered,” Moon told the BBC in an interview Friday. 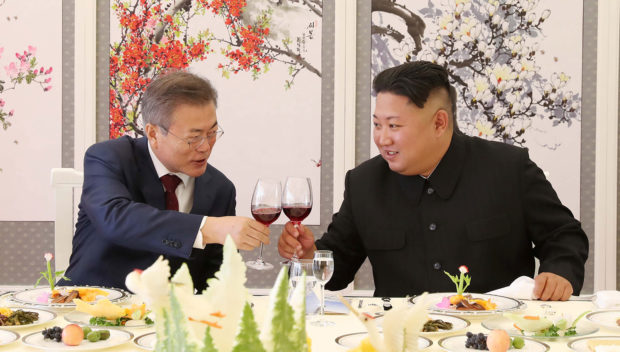 In addition to re-establishing transportation ties, Pyongyang and Seoul agreed to work on a bid to co-host the 2032 Olympic Games and set up webcam exchanges for families separated by the Korean War. Military officials also agreed to meet in the near future to iron out details of a military pact struck by Kim and Moon at their latest summit. The pact includes a halting of military exercises, a no-fly zone near the shared border, and a reduction in landmines and guard positions within the Demilitarized Zone (DMZ).

It remains unclear how far Seoul and Pyongyang can move toward reconciliation as long as U.S-backed international sanctions are in place. Moon has promised to revive economic cooperation with the North, but the Trump administration has said Seoul will not lift sanctions without a green light from Washington.

Moon’s government earlier in October floated a proposal to lift unilateral sanctions on Pyongyang, but quickly walked backed the idea after Trump asserted Seoul could “do nothing without our approval.”