“As the president has said, the climate is changing, but what the causes of that are, are yet to be seen,” Pence told reporters while in Moultrie, Georgia, surveying hurricane damage.

“The reality is it’s some of the worst storms that have ever affected this area were 50 and 100 years ago,” Pence said.

Pence’s remarks echo President Donald Trump’s recent comments on global warming. Trump told “60 Minutes” on Sunday that “we had hurricanes that were far worse” in the past and said scientists had a “political agenda” when it came to global warming. 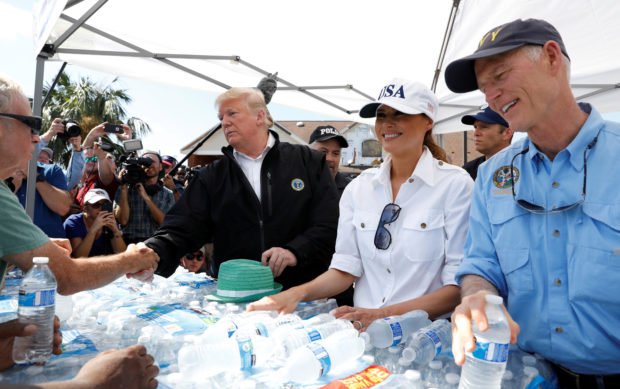 However, Michael was still a Category 3 strength storm as it made its way into Georgia, making it the most powerful hurricane to hit the state since 1898. Michael did $2 billion worth of damage to Georgia crops, Pence said.

#HurricaneMichael had a devastating impact on Georgia’s sunbelt & across the region, inflicting an estimated $2B worth of damage to the state’s cotton, pecan & peanut crops. But the spirit of the people of this region & the strength of the people of Georgia is inspiring America. pic.twitter.com/heLTX5Srta

Some scientists and media pundits claimed Hurricane Michael was made worse by warmer ocean temperatures, which they attribute to man-made warming. But it’s also true that the U.S. has seen stronger storms in the past. (RELATED: Are More Hurricanes Hitting Florida? The Data Unequivocally Shows Us The Answer Is No)

“The best scientific info we have now is that the probabilities of these intense hurricanes — from the point of view of both wind and water — are going up in many places because of global warming,” hurricane expert Kerry Emanuel told CNN.

Regardless, Michael was still devastating for a wide swath of the southeastern U.S., possibly causing upwards of $30 billion in damage. Officials raised the storm’s death toll to 26 on Tuesday.