Israeli warplanes carried out strikes against at least 20 targets in Gaza on Wednesday after a rocket fired from the Palestinian territory struck a house in the southern Israeli city of Beersheba.

Israel Defense Forces (IDF) said it destroyed several targets associated with Hamas, including an attack tunnel and a rocket manufacturing site. The Israeli military also struck a group of militants that was attempting to fire a rocket into Israel.

A 25-year-old militant was killed at one of the sites hit in the Israeli assault, according to the Gaza Health Ministry. Three other people were wounded.

The rocket strike on Beersheba was the first time a residence has been hit there since the 2014 war between Israel and Hamas, the militant group that governs Gaza. Because of Beersheba’s size and location — 200,000 people 30 miles from the Gaza border — an attack on the city is widely seen as a more serious threat than flare-ups of violence at the Israeli frontier. 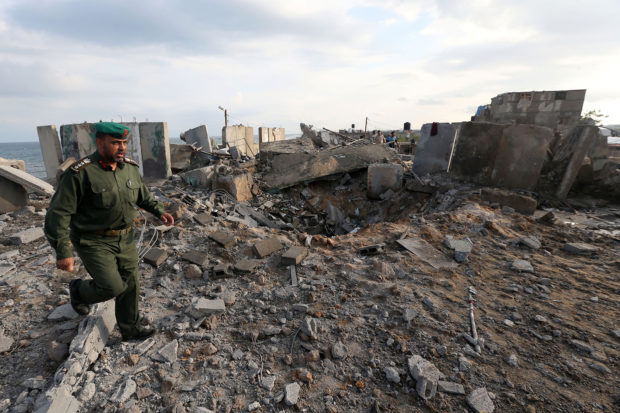 A member of Palestinian security forces loyal to Hamas inspects the scene of an Israeli air strike in the southern Gaza Strip Oct. 17, 2018. REUTERS/Ibraheem Abu Mustafa

In a rare move toward de-escalation, Hamas, Palestinian Islamic Jihad and other groups released a statement denying responsibility for Wednesday’s rocket attack.

“We reject all irresponsible attempts that try to change the direction and sabotage the Egyptian efforts, including the overnight firing of the rocket,” the groups said, referring to ongoing Egypt-brokered ceasefire talks. “At the same time, we emphasize we are ready to confront the Israeli aggression.” (RELATED: Ceasefire Between Israel And Hamas Begins)

Despite the denial, the IDF said it would continue to hold Hamas responsible for all rocket attacks coming out of Gaza.

“Rockets of the type fired overnight are in the possession of just two organizations, Hamas and Palestinian Islamic Jihad,” Manelis said, according to Haaretz.

“Hamas is harming the prospects for an arrangement [on long-term calm] and easing [the situation] in Gaza, which mainly harms the residents of Gaza,” he added.

Hamas has organized weekly mass demonstrations at the Israel-Gaza border, primarily to protest the Israeli-Egyptian blockade of Gaza that was implemented when the group took power in 2007. The rallies have often turned violent, as groups of militants interspersed with peaceful protesters launch grenades and makeshift firebombs at Israeli soldiers, provoking return fire into the crowds.

At least 155 Palestinians have been killed since the protests began in March. One Israeli soldier was killed by sniper fire July.

Although both sides have sought to ease tensions through Egyptian-mediated ceasefires, the process has often broken down into tit-for-tat strikes stemming from conflicts at the Gaza border. The head of head of Egyptian military intelligence, Abbas Kamel, was scheduled to visit Gaza this week to restart peace talks, but postponed the trip due to the recent escalation in violence.

The IDF said Wednesday it would refrain from further strikes in Gaza as long as Hamas stopped the rocket fire, but many Israeli politicians were demanding further action. Israeli Defense Minister Avigdor Lieberman announced that Israel will close all Gaza border crossings and limit the fishing zone around the territory in response to the Beersheba attack.