Pastor Andrew Brunson revealed the lowest moment of his two years in Turkish prison during an appearance Tuesday night on “Hannity.”

“They weren’t and that was one of the very difficult things. I was isolated by culture and by language but especially by religion. It was very difficult to be the only Christian among them,” the pastor began. Brunson was detained by Turkish authorities over accusations of espionage and aiding terrorist groups.

“The truth is we had been preaching Jesus Christ sir — that’s why we were in Turkey for 23 years up until that time — is to share the gospel of Jesus Christ with Turks,” he continued. “We’ve done that openly and never had a problem. So it was very shocking to be accused of terrorism.” (RELATED: Pastor Brunson Kisses American Flag After Being Freed From Turkey)

When asked what his lowest moment was, Brunson said, “When I was arrested and it kept going on and on, it seemed that there was no way out. I lost a lot of hope. And what helped me, I began to see there was value in my suffering especially as time went on. I saw that many people around the world began praying for me.”

He added, “[my wife] would bring encouragement to me and tell me that people were praying for me. And as I learned that, I began to see that God was involved in this and God was going to do something with my suffering.”

The conversation then turned to the pastor’s visit with President Trump in the Oval Office where he prayed over the president. (RELATED: Pastor Brunson Prays Over President Trump In Oval Office – ‘Fill Him With Your Wisdom And Strength And Perseverance’) 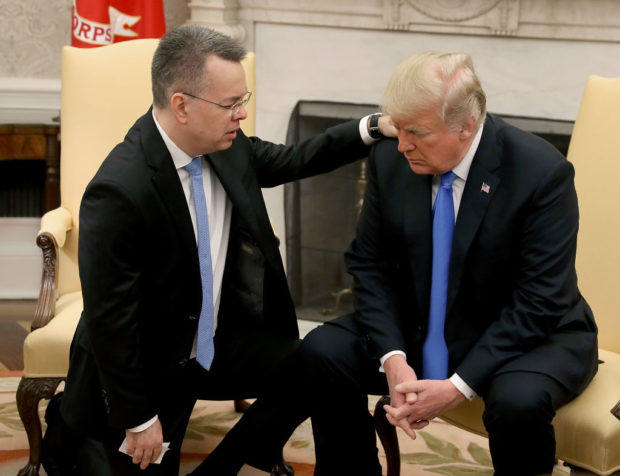 WASHINGTON, DC – OCTOBER 13: U.S. President Donald Trump and American evangelical Christian preacher Andrew Brunson (L) participate in a prayer in the Oval Office a day after Brunson was released from a Turkish jail, at the White House on October 13, 2018 in Washington, DC. Brunson was detained for two years in Turkey on espionage and terrorism-related charges that the pastor said were false. (Photo by Mark Wilson/Getty Images)

“Well it’s something that we had hoped to be able to do,” said Brunson. “My wife for at some time wanted to pray some verses over him from Isaiah, just asking for the spirit of God to come upon him. And before we went to meet him, when we learned we would be able to visit him in the White House, we prayed together, my wife and I, and asked God to give a set opportunity to pray for the president.”

Brunson, a Christian missionary to Turkey, was arrested in October 2016 and accused of aiding terrorists through the church he operated with his wife. Convicted and sentenced to three years in prison, Brunson was released for time served and allowed to leave Turkey, returning home on Friday.