A priest named in Pennsylvania’s grand jury report on sexual abuse pleaded guilty Wednesday to charges of child endangerment and corruption of minors.

The Rev. David Lee Poulson is one of two priests named in Pennsylvania’s report who have been charged for crimes discovered by the grand jury probe that had not passed the statute of limitations. Authorities arrested Poulson during the grand jury probe earlier in 2018. The priest reportedly abused an altar boy, forced him to confess afterward, then abused him again at a hunting camp at which he also tried to assault another boy. (RELATED: Washington Archdiocese Publicly Names 31 ‘Credibly Accused’ Predator Priests) 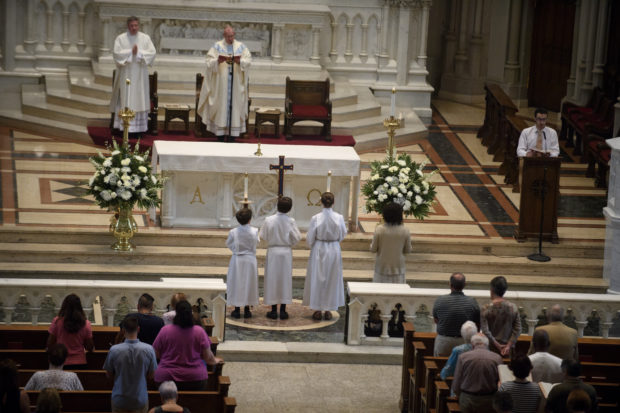 A comprehensive investigation into Pennsylvania’s Catholic Church reveals massive sex abuse scandal and cover-ups. Parishioners worship during a mass to celebrate the Assumption of the Blessed Virgin Mary at St. Paul Cathedral, the mother church of the Pittsburgh Diocese on Aug. 15, 2018 in Pittsburgh, Pennsylvania. The Pittsburgh Diocese was rocked by revelations of abuse by priests the day before on Aug. 14, 2018.(Photo by Jeff Swensen/Getty Images)

“Today’s guilty plea by a predator priest in Jefferson County is a clear statement that no matter who abuses a child, no one is above the law,” said state Attorney General Josh Shapiro, according to The Associated Press.

Shapiro, a Democrat, also said that Poulson would have to register as a sex offender, likely for ten years.

A 2010 “confidential memorandum” from the Erie Catholic diocese revealed that Poulson had confessed to being aroused by a minor. He resigned from ministry in 2018 before his arrest after a military chaplain reported that a 23-year-old man alleged that Poulson had repeatedly abused him starting when he was 8 years old.

“Many hearts have been broken, particularly those of the victims and their loved ones,” Bishop Lawrence T. Persico of Erie said concerning Poulson’s crimes.

Rev. John Thomas Sweeney, the other priest named in and criminally charged as a result of Pennsylvania’s report, pleaded guilty in the summer of 2018 to indecent assault. He has yet to be sentenced.