The editor-in-chief and co-founder of Politico, John F. Harris, implied Wednesday that he thinks President Donald Trump is a white nationalist.

Harris was responding to reports that a white nationalist leader is angling to take over the Republican Party, writing on Twitter that he “thought that job had been filled.” 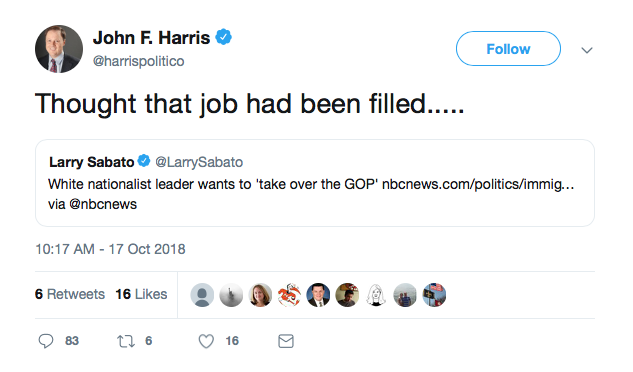 Harris later tried to “clarify” his comment, insisting it was just a “wisecrack” rather than a “broad swipe” at Republicans or the president.

“This could be interpreted as a broad swipe rather than a quip about the headline on the NBC piece,” Harris said. “Sometimes wisecracks get lost in Twitter translation so appreciate the chance to clarify.” 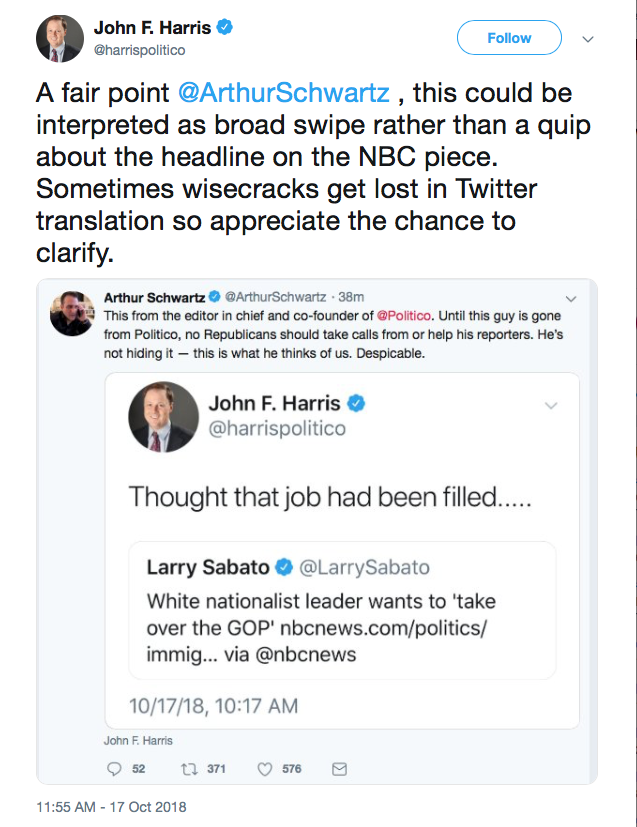 Republican National Committee (RNC) Chairwoman Ronna McDaniel said that Harris’ “offensive statement” is “another example of why distrust in the media is at an all-time high.”

This offensive statement from the head of Politico is another example of why distrust in the media is at an all-time high. pic.twitter.com/cdGiFiKo4S

“There are professional standards of evidence, balance, and rhetorical restraint in Old Media that simply do not exist in New Media.” — John Harris, 2006. How outdated does THAT sound? https://t.co/G0DhsIT9tF

WoW Very professional. And you all wonder why the majority of Americans can’t trust the MSM.

Pretty clear that this is a shot at the president by a “journalist” who claims to be “editor in chief” and Politico. Just another example of the taint in the media and why their “objectivity” will always be questioned.

So you run a supposed straight news source? Don’t worry. I’ve archived this for when you take it down. https://t.co/D0SpwaYWku

I was at the Western Wall on Jerusalem Day this past May & took some video. Guess what these hundreds of thousands of Jews probably think about you, John. It ain’t anything good. pic.twitter.com/WjLCec0OBP

Why no one trusts the media, Exhibit 535