The Trump administration repealed 12 existing regulations for every new one issued by federal agencies, according to the Office of Information and Regulatory Affairs (OIRA).

That puts the Trump administration well above its goal of repealing two regulations for every new one issued. On net, OIRA estimates deregulation saved $23 billion in 2018.

“This plan reaffirms the principles of individual liberty and limited government essential to reform,” OIRA administrator Neomi Rao said in a statement.

“It also highlights the success of ongoing efforts, initiatives for improving accountability, and the promotion of good regulatory practices,” Rao said of the newly-released Unified Agenda.

OIRA issued the administration’s new Unified Agenda for regulatory actions on Wednesday. The Unified Agenda details the thousands of short and long-term actions being taken by federal agencies, like the Environmental Protection agency (EPA).

President Donald Trump made deregulation a major priority of his administration, quickly issuing executive actions for agencies to review and get rid of overly-burdensome and duplicative rules. (RELATED: The End Of Maple Syrup, Coffee And Beer? Scientists Are Using Our Favorite Luxuries To Hype Global Warming) 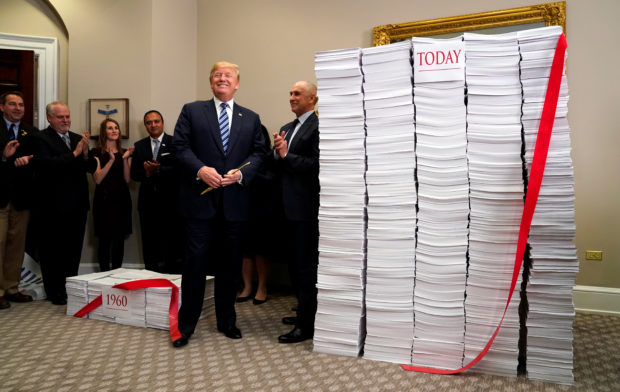 U.S. President Donald Trump smiles as he speaks about deregulation at the White House in Washington, U.S., December 14, 2017. REUTERS/Kevin Lamarque.

Tackling the federal regulatory apparatus has long been a goal of conservatives. A report issued by the Competitive Enterprise Institute in April found federal regulations cost nearly $2 trillion a year, or about $15,000 for every American.

Trump’s focus on regulations has yielded some results. For example, the number of pages in the Federal Register fell to the lowest levels since 1993, and the administration claimed to repeal 22 regulations for every new one proposed in its first year.

OIRA noted that deregulation, on net, saved $23 billion in regulatory costs in 2018, and federal agencies were on track to save another $18 billion in 2019.

“The momentum for reform continues to accelerate as agencies complete substantial deregulatory actions,” Rao said in her statement.

According to OIRA, revising Obama-era fuel economy regulations for cars and light trucks could save between $120 billion and $340 billion when the deregulatory action is finalized next year.

The EPA and Transportation Department proposed freezing fuel economy standards in August, upending an Obama administration regulation that effectively required new cars and trucks to get more than 50 miles per gallon by 2025.

However, this and other deregulatory actions have been met with intense criticism from Democrats, environmentalists and some industries.

“Over the lifetime of the current fuel-economy standards, consumers will save $1 trillion on gasoline and will keep $12 billion barrels of oil in the ground,” Massachusetts Democratic Sen. Ed Markey said in an August hearing.

“That’s the simple formula for fuel-economy. You save consumers money and you save the planet at the same time,” Markey said in support of the Obama-era fuel regulations.