The pastor of Andrew Brunson’s home church in Montreat, North Carolina, recalled the tense experience of attending Brunson’s trial in Turkey last week, in an exclusive interview with The Daily Caller.

The Evangelical Presbyterian pastor, Rev. Richard L. White of Christ Community Church, also offered insight into the profound effect that Brunson’s two-year imprisonment has had on the congregation at the local church and on Christians around the world.

Swept Into The Storm

Rev. White flew to Turkey last week to attend Pastor Andrew Brunson’s fourth trial in the coastal city of Izmir, where for 25 years Brunson had himself pastored a small church with his wife, Norine. In October 2016, Pastor Brunson was among the tens of thousands detained by the government of President Recep Tayyip Erdogan in the wake of an alleged failed coup attempt three months earlier. Brunson was eventually charged with terrorism, espionage and attempting to overthrow the government. He faced the possibility of spending the rest of his life in a Turkish prison.

Over the next two years, the unassuming Brunson became the unlikely figure at the center of a geopolitical firestorm. His imprisonment drew the attention of President Donald Trump, and sparked a diplomatic row between the United States and Turkey. When Turkey placed Brunson under house arrest last July and refused to release him, the United States doubled tariffs on its aluminum and steel imports. The Turkish lira plummeted in response, which threatened to reverberate throughout global markets. 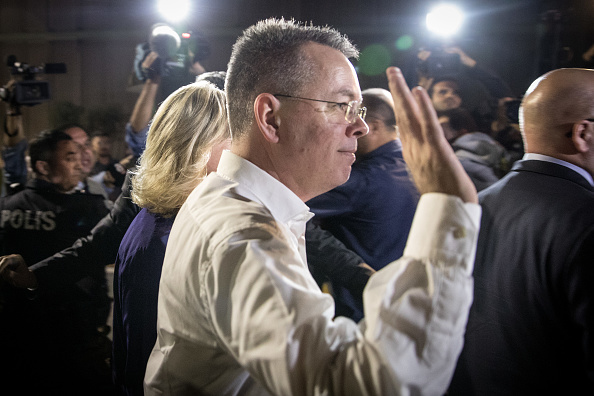 Last Friday’s trial, therefore, garnered international attention. According to Rev. White, who was also present at one of Brunson’s previous trials in May, the courtroom was “packed.”

“There were three times as many people at this trial [than the one in May],” he said. “Far more reporters than before, and a lot of observers, as well as the U.S. consulate presence there.”

A number of reporters were not allowed in at all. Observers like him, he said, were shut out completely.

After a lunch break, Pastor Brunson’s wife, Norine, secured permission from the consulate to allow Rev. White into the courtroom, along with a member from his church who had accompanied him on the trip.

“It was an amazing afternoon in the courtroom,” White said. “Wow.”

Upon entering the courtroom, he learned that the prosecution’s case had disintegrated that morning, in what he characterized as a remarkable answer to prayer. “We had been praying that those who testified against Andrew would now have to testify in his behalf. And they did. We expressly prayed that repeatedly throughout this trial. And that’s exactly what happened.”

As reported by Turkey’s Hurriyet Daily News, the prosecution’s key witnesses flipped their testimony that morning, which “was seen as surprising by some observers.” This was a reversal of fortune for Pastor Brunson, who at his previous trial publicly forgave members of his own church for testifying against him.

“In the afternoon, there were no more witnesses,” White said. “The judge asked basically for closing arguments from the prosecutor, and he — for about 45 to 50 minutes — read from the 65-page indictment against Andrew.”

The prosecutor then recommended that the judicial restriction be lifted which kept Brunson under house arrest, and that his travel ban also be lifted. But he also demanded a 10-year prison sentence.

The judges returned after a tense 10-minute break, during which time, White said, Andrew’s wife Norine was on her knees praying in the courtroom. When they returned, Andrew and his lawyer — who had prepared to bring witnesses and offer many of Brunson’s sermons as evidence on his behalf — were told that they would not be allowed to bring a defense.

Nevertheless, Brunson was asked by the judge to respond to the charges against him. Rev. White said that “Andrew just stood up and he said three things: ‘I am innocent of all these charges, I love Jesus and I love Turkey.'” With that, the defense rested, and the judges left to deliberate for another 20 minutes.

“You could have cut the tension with a knife, it was so thick in the courtroom,” White remembered. Norine speculated that perhaps a deal had been struck whereby a verdict would be reached if the defense chose not to present their case, but no one was sure. Erdogan had backed out of a deal before.

“Andrew was weeping and we didn’t know,” White said. “Norine was allowed to go and be with Andrew near the front of the courtroom. They met with the lawyer, they talked together, they prayed, they embraced. It was a tense moment. We had no idea.”

White mentioned that during this time, the U.S. chargé d’affaires — the diplomat who heads the embassy in the place of an ambassador — leaned over to him and observed that the Brunsons truly live what they believe, harboring no bitterness toward Turkey despite their suffering. “I don’t know how else to describe it, other than that they are Christ-like,” the official reportedly said to him.

When the judges returned, Andrew and his lawyer stood. “We all just prayed in the back,” White said. The court issued a sentence of three years, one month and 15 days, minus time served, as well as a fine. According to Rev. White, “there was some confusion among the Americans regarding what exactly did the judges say,” but at length the chargé d’affaires made certain that the travel ban had indeed been lifted.

The Brunsons packed 13 bags, were driven to the airport and within 24 hours were praying for President Donald Trump in the Oval Office. 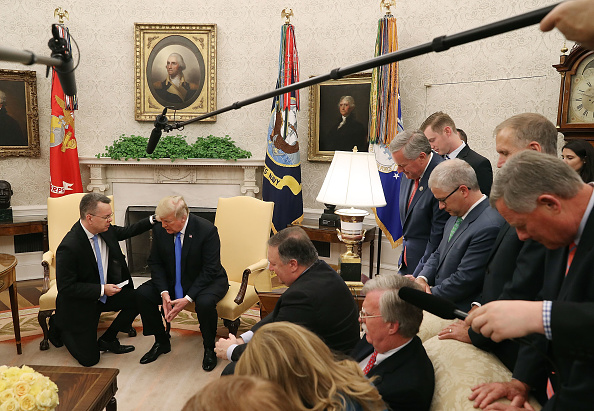 WASHINGTON, DC – OCTOBER 13: Flanked by members of Congress and administration officials, U.S. President Donald Trump and American evangelical Christian preacher Andrew Brunson (L) participate in a prayer in the Oval Office a day after Brunson was released from a Turkish jail, at the White House on October 13, 2018 in Washington, DC. (Photo by Mark Wilson/Getty Images)

White remembered that the last time he saw Andrew before his imprisonment was in July 2016, the same month of the coup attempt in Turkey. Andrew and Norine were visiting their home church, and White recalled that as they were leaving, he told them both that he was praying “the crazy prayer” for them. The phrase is a reference to something White heard from an Egyptian preacher.

“I heard this Egyptian pastor challenge an American congregation to pray — actually challenged them to all-night prayer vigils for the lost. He said, ‘My church gets together every Friday, and we pray all night. We pray the crazy prayer.’ I said, ‘The crazy prayer? What’s that?'”

The “crazy prayer,” Rev. White explains, was how the Egyptian pastor characterized the apostles’ prayer “for boldness” in Acts 4:29. According to the Bible story, the apostles Peter and John are released after having been imprisoned for healing a man. But they are threatened and charged by authorities no longer to preach anymore in the name of Christ.

White said of the apostles that “instead of praying, ‘Lord, sic ’em, get them,’ they pray, ‘And now, Lord, look upon their threats and grant to your servants to continue to speak your word with all boldness, while you stretch out your hand to heal, and signs and wonders are performed through the name of your holy servant Jesus.'”

According to the biblical text, when the apostles had prayed this, “the place in which they were gathered together was shaken.” White notes that even after this miraculous experience, the apostles were thrown into prison again. He sees similarities to Andrew’s experience.

“The Lord certainly did bring Andrew into a worldwide focus of suffering unjustly for the sake of Christ. He wasn’t tortured or brutally beaten, like some of our brothers and sisters are in many places in the world. But nonetheless, he was unjustly treated and robbed of ministry, life with his family, all so he could be used as a political pawn. It’s just really sad. He had to leave the country. It’s a sad thing.”

“But what God did with all this was to rally hundreds of thousands of Christians around the world. My [Turkish] Christian friend was telling me that at the last trial — which was the third one in July — Christians came down from Estonia to see Andrew and pray for him at the trial.”

“But Christians all over the world have prayed for him, and they prayed for Turkey. And I think that’s God really stretching out His hand to rally prayer, because He’s going to do something in that place. We haven’t seen it yet, but we’re hopeful that the harvest will come, where Turkey will be really open to the gospel, and that certainly the church will have greater freedom in its work there. But that remains to be seen.” 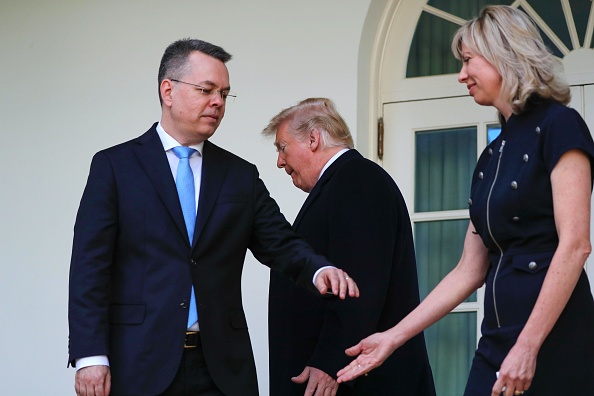 Freed US pastor Andrew Brunson (L) and his wife Norine (R) hold hands as they follow US President Donald Trump to the Oval Office in Washington, DC, on October 13, 2018. (Photo by ROBERTO SCHMIDT / AFP)

When asked how Pastor Brunson’s persecution has affected his own North Carolina congregation, Rev. White remembered the fervent prayers that attended Andrew’s ordeal. “I’ve been touched by the endurance of prayer,” he explained. “People have not grown weary in praying for Andrew and his release, as well as praying for Turkey.”

For each of Andrew’s four trials, the church distributed hundreds of “prayer guides,” replete with Scripture verses and specific requests to help congregants pray. When a trial would begin at 9 a.m. in Turkey, vigilant church members would be gathering in the sanctuary seven hours earlier in North Carolina. “Every time we’ve had a trial, we’ve had a 2 a.m. prayer group, from 2 a.m. to 8 or 9 a.m. perhaps,” White said.

White also believes that Brunson’s suffering offers a profound example to the rising generation of Christians. “I’m also impressed with the young people, kind of the next generation that is very concerned for Andrew and wants to pray for him,” he said. “In our church, but also I know in other churches around the country. … I’ve had parents come up to me to say, ‘You know, my kids won’t go to sleep at night until they pray for Pastor Andrew.’ And I know kids in our congregation are very concerned for Pastor Andrew.”

“And I’m wondering,” White continued, “What is this speaking to the next generation about service to God — remaining faithful when it’s difficult, when you’re falsely accused? I think there’s a powerful story there that we probably won’t know for years. But hope lives in the hearts of these kids, who are framing their worldview.”

Regarding the lessons Pastor Brunson’s testimony holds for the average Christian, White said, “This is a dangerous world, and you can be thrown in prison for your faith. And is Jesus Christ worth it? And I think what Andrew has said is, ‘Yes, He is.’ And that’s just a tremendous testimony to us — that Christ is worthy of our faithful service, even when falsely accused on His behalf.”

Concerning what comes next for Brunson, White said that “Andrew is going to need a period of healing and recovery, just regrouping with his family.” He said that Andrew eventually plans to write a book.

“His book is going to be very different than, say, the Chinese Christians who have all had these great [supernatural] experiences of Jesus. I think Andrew’s experience has been not the Lord Jesus appearing in the cell, but has been more walking by faith all through this. To walk by faith is really difficult — just the uncertainties of what he was looking at.”

“But that’s really his story to tell,” he added.